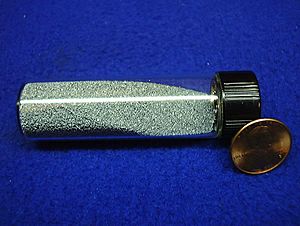 Tungsten (sometimes named wolfram) is a chemical element on the periodic table. It has the chemical symbol W and it has the atomic number 74. It is a steel-gray to white colored metal. In chemistry, it is placed in a group of metal elements named the transition metals. Tungsten is found in several ores, including wolframite and scheelite.

Tungsten has a higher melting point than any other non-alloy that exists. The pure form (only tungsten) is mainly used in electrical equipment. Its compounds and alloys are used for many things, the most well known being its use in electrical filaments for light bulbs. It is also used in the filament and target in most X-ray tubes, superalloys, and in glass-to-metal seals.

Tungsten's density and hardness have many uses. In the military, for example, tungsten has been used in armor-piercing artillery.

Tungsten's density is almost the same as gold. Gold-plated tungsten ingots have been fraudulently passed off as solid gold.

All content from Kiddle encyclopedia articles (including the article images and facts) can be freely used under Attribution-ShareAlike license, unless stated otherwise. Cite this article:
Tungsten Facts for Kids. Kiddle Encyclopedia.