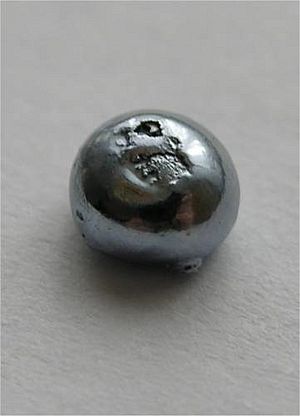 A small ball of osmium

Osmium is a chemical element. It is element number 76 on the periodic table. Its symbol is Os.

There is not much osmium on earth. There is actually such a small amount that osmium is very expensive.

Osmium is a metal and it does not react very much, and such a metal is known as a "noble metal".

It was discovered in 1804 by Smithson Tennant in London, England. He found it together with Iridium in a bit of Platinum, which he had dissolved in Aqua regia.

All content from Kiddle encyclopedia articles (including the article images and facts) can be freely used under Attribution-ShareAlike license, unless stated otherwise. Cite this article:
Osmium Facts for Kids. Kiddle Encyclopedia.