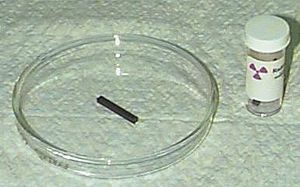 A small amount of uranium in a glass dish

Uranium is a chemical element (a metal) on the periodic table. It has an atomic number of 92, which means that a uranium atom has 92 protons in its center, which is called a nucleus. Uranium that is dug out of the ground will be made from three different isotopes: three different types of uranium with different numbers of neutrons in their nuclei. Most of it is Uranium-238; uranium-235 is less common; uranium-234 is the rarest. Pitchblende is the main ore that is mined for uranium.

Uranium-235 can be used in nuclear reactors and nuclear weapons by making a nuclear chain reaction. This turns the uranium-235 into uranium-236 and splits the nucleus into two smaller nuclei. This makes two completely different elements with smaller atomic numbers. This process is called nuclear fission and creates lots of heat. This heat makes it very useful for making steam in nuclear reactors, or for making explosions with nuclear weapons. But most such weapons use Plutonium made from uranium-238. Uranium is a bit radioactive.

Uranium which has had its uranium-235 taken out of it is called depleted uranium. It is used in anti-tank weapons. Uranium can also be used as a dye for stained glass or pottery, which is how it was used before people found out that it was radioactive. 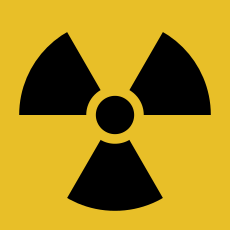 Uranium is a dangerous substance. Because Uranium is radioactive it is often seen with the hazard sign for radioactive elements, a group of three triangles with curved outer edges pointing in towards the middle (as you can see on the left). Some people believe that Uranium is light green, and glows, due to the way it is depicted in many movies. However, this is not true. Uranium is a shiny white metal, but is usually seen in its oxide form which is black. Spent or partially spent uranium fuel rods kept underwater, for example inside a nuclear reactor or in a spent fuel pool, can glow blue due to Cherenkov radiation. In addition to being radioactive, uranium is a heavy metal and is chemically toxic.

Uranium is a silvery white, weakly radioactive metal. It has a Mohs hardness of 6. It is malleable, ductile and slightly paramagnetic. It is strongly electropositive. It is a poor electrical conductor. Uranium metal has a very high density of 19.1 g/cm3.

Uranium metal reacts with almost all non-metal elements and their compounds. Hydrochloric and nitric acids dissolve uranium, but non-oxidizing acids other than hydrochloric acid dissolve the element very slowly.

Uranium-235 was the first isotope that was found to be fissile. Other naturally occurring isotopes are fissionable, but not fissile.

As little as 15 lb (7 kg) of uranium-235 can be used to make an atomic bomb. The nuclear weapon detonated over Hiroshima, called Little Boy, relied on uranium fission. 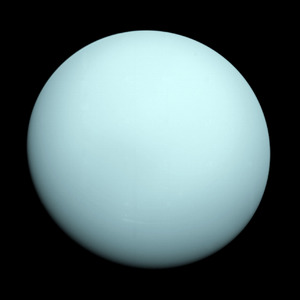 The planet Uranus, which uranium is named after

The use of uranium in its natural oxide form dates back to the year 79 CE. It was used in the Roman Empire to make ceramic glazes yellow. Yellow glass with 1% uranium oxide was found in a Roman villa on Cape Posillipo in the Bay of Naples, Italy. It was found by R. T. Gunther of the University of Oxford in 1912. In the late Middle Ages, pitchblende was extracted from the Habsburg silver mines in Joachimsthal, Bohemia (now Jáchymov in the Czech Republic). In the early 19th century, the world's only known sources of uranium ore were these mines.

All content from Kiddle encyclopedia articles (including the article images and facts) can be freely used under Attribution-ShareAlike license, unless stated otherwise. Cite this article:
Uranium Facts for Kids. Kiddle Encyclopedia.