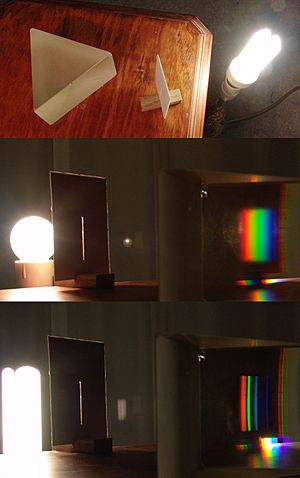 Continuous spectrum of an incandescent lamp (mid) and discrete spectrum lines of a fluorescent lamp (bottom).

Spectral lines are how scientists tell one element from another by looking at color.

The colors of the rainbow

In order to understand spectral lines, color has to be understood. In a rainbow, the colors of light go from purple to red. Several hundred years ago, the famous scientist Issac Newton did an experiment where he showed that even white light from the Sun was made up of all the colors of the rainbow. When other scientists following him looked at this rainbow very closely, they noticed that there were dark lines breaking up the rainbow, where certain shades of colors should be. These lines were very small, and could only be seen when the rainbow got streched out very far. They investigated this further, and discovered that certain chemical elements, like the hydrogen and helium that make up the Sun, absorbed certain frequencies of light where those colors should be, like a sponge absorbs water, but does not absorb chalk.

Soon, scientists discovered that when they heated up other chemical elements, like calcium and oxygen, so hot that they shined with a white light, they found similar lines, but in different places. No two chemical elements had these lines in exactly the same places along the rainbow, and they also soon discovered that could be used to be able to tell what stars were made up of in the Universe.

Since each set of spectral lines was unique, scientists could also be able to use this in a technique called red shift. Red shift is a method astronomers use, after they know what a star is made of, to tell how fast an object far away in the Universe is moving. It also tells them how far away it is.

All content from Kiddle encyclopedia articles (including the article images and facts) can be freely used under Attribution-ShareAlike license, unless stated otherwise. Cite this article:
Spectral line Facts for Kids. Kiddle Encyclopedia.