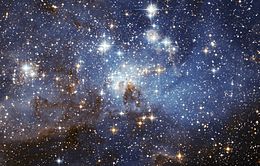 A star-forming region in the Large Magellanic Cloud. NASA/ESA image 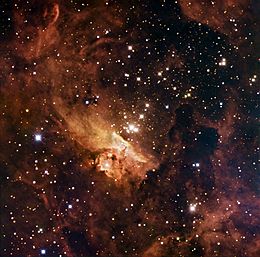 The open star cluster Pismis 24 is in the nebula NGC 6357. It has some of the largest stars known. Pismis 24-1 has nearly 300 times the mass of the Sun. It is a multiple system of at least three stars.
The strange shapes taken by the clouds are a result of the vast radiation emitted by these huge, hot stars.
This image combines image data with three different filters in visible light from the 1.5-metre Danish telescope at the ESO La Silla Observatory in Chile. 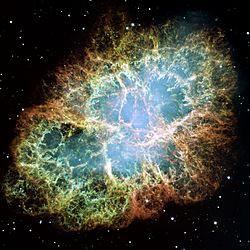 The Crab Nebula, remains of a supernova that was first seen around 1050 AD

A star is a massive ball of plasma (very hot gas) held together by gravity. It radiates energy because of the nuclear reactions inside it

It radiates heat and light, and every other part of the electromagnetic spectrum, such as radio waves, micro-waves, X-rays, gamma-rays and ultra-violet radiation. The proportions vary according to the mass and age of the star.

The energy of stars comes from nuclear fusion. This is a process that turns a light chemical element into another heavier element. Stars are mostly made of hydrogen and helium. They turn the hydrogen into helium by fusion. When a star is near the end of its life, it begins to change the helium into other heavier chemical elements, like carbon and oxygen. Fusion produces a lot of energy. The energy makes the star very hot. The energy produced by stars radiates away from them. The energy leaves as electromagnetic radiation.

Birth of a star

A star begins as a collapsing cloud of material made mostly of hydrogen, with helium and tiny amounts of heavier elements. Once the stellar core is dense enough, some of the hydrogen is changed into helium through nuclear fusion. The energy moves away from the core by a combination of radiation and convection. The star's radiation stops it from collapsing further under its own gravity. Once the hydrogen fuel at the core has been used up, those stars with at least 0.4 times the mass of the Sun expand to become a red giant. In some cases they fuse heavier elements. When the star is very old it might expand until its outer layers are pushed away. If the star is heavier, it might explode and spread most of its mass into space. The matter it spreads into space may make a new generation of stars. If the star is even larger it may collapse and form a black hole.

The star nearest to Earth is the Sun. It is not accurate to say "most of the energy on Earth comes from it". It is more accurate to say the energy of sunlight supports almost all life on Earth by photosynthesis, and drives Earth's climate and weather. The Earth has its own source of heat in its interior: see Age of the Earth. The internal heat comes from the original gravitational formation of the Earth, and from the radioactive materials inside it.

We can see other stars in the night sky when the Sun goes down. They are made mostly of hydrogen and a little bit of helium plus other elements. The sun is such a star.

Most stars look like shiny dots from Earth, because they are far away. Our Sun is the closest star to us. The earth and other planets move around (orbit) the Sun. The Sun and all things that orbit it are called the Solar System. Many other stars have planets orbiting them: they are called exoplanets.

Stars vary greatly in size. The smallest neutron stars (which are actually dead stars) are no bigger than a city. The neutron star is incredibly dense. If you were to take a layer a micrometre thick and apply it onto a tank, it would be a very tough armor. The tank would be so heavy, it would sink into the center of the Earth.

Hypergiant stars are the largest stars in the Universe. They have a diameter over 1,500 times bigger than the Sun. If you changed the sun into one of these huge stars down where the sun is, its outer surface would reach beyond the orbit of Jupiter, and the earth would be well inside the star. The star Betelgeuse, in the Orion constellation is a red supergiant star. 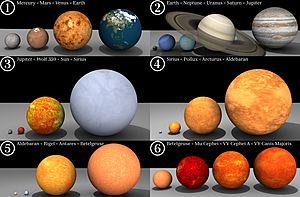 Beside light, stars also give off a solar wind and neutrinos. These are very small particles.

Stars are a source of a gravity field. This is what keeps planets close to them. It is also not unusual for two stars to orbit each other. This happens when they are close together. This is also because of gravity, in the same way as the Earth orbits the Sun. These binary stars (binary meaning "two") are thought to be very common. There are even groups of three or more stars orbiting each other. Proxima Centauri is the smallest star in a group of three.

Stars are not spread evenly across all of space. They are grouped into galaxies. A typical galaxy contains hundreds of billions of stars. 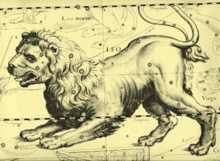 People have seen patterns in the stars from long ago. This, from 1690, is the constellation of Leo the lion, as imagined by Johannes Hevelius.

Stars have been important to people all over the world for all of history. Stars have been part of religious practices. Long ago, people believed that stars could never die. Astronomers organized stars into groups called constellations. They used the constellations to help them see the motion of the planets and to guess the position of the Sun. The motion of the Sun and the stars was used to make calendars. The calendars were used by farmers to decide when to plant crops and when to harvest them.

The life of stars

Stars are made in nebulas. These are areas that have more gas than normal space. The gas in a nebula is collected by gravity. The Orion nebula is an example of a place where gas is coming together to form stars.

Stars spend most of their lives burning (fusing) hydrogen to make energy. When hydrogen is fused it makes helium. To fuse hydrogen it must be very hot and the pressure must be very high. Fusion happens at the center of stars, called "the core".

The smallest stars (red dwarfs) fuse their hydrogen slowly and live for 100 billion years. Red dwarfs live longer than any other type of star. At the end of their lives, they become dimmer and dimmer. Red dwarfs do not explode.

Most stars use up the hydrogen at their core. When they do, their core shrinks and becomes very hot. It becomes so hot it pushes away the outer layer of the star. As the outer layer expands it makes a red giant star. Astro-physicists think that in about 5 billion years, the sun will be a red giant. Our sun will be so large it will eat the Earth. After our sun stops using hydrogen to make energy, it will use helium in its very hot core. It will be hotter than when it was fusing hydrogen. Heavy stars will also make elements heavier than helium. As a star makes heavier and heavier elements, it makes less and less energy. Elements as heavy as iron are made in heavy stars.

Average stars (like our sun) will push away their outer gases. The gas it pushes away makes a cloud called a planetary nebula. The core part of the star will remain. It will be a ball as big as the Earth and called a white dwarf. It will fade into a black dwarf over a very long time.

Later in large stars, heavier elements are made by fusion. Finally the star makes a supernova explosion. Most things happen in the universe so slowly we do not notice. But supernova explosions happen in only 100 seconds. When a supernovae explodes its flash is as bright as a 100 billion stars. The dying star is so bright it can be seen during the day. Supernova means "new star" because people used to think it was the beginning of a new star. Today we know that a supernova is the death of an old star. The gas of the star is pushed away by the explosion. It forms a giant cloud of gas called a planetary nebula. The crab nebula is a good example. All that remains is a neutron star. If the star was very heavy, the star will make a black hole. Gravity in a black hole is extremely strong. It is so strong that even light cannot escape from a black hole.

The heaviest elements are made in the explosion of a supernova. After billions of years of floating in space, the gas and dust come together to make new stars and new planets. Much of the gas and dust in space comes from supernovae. Our Sun, the Earth, and all living things are made from star dust.

Astronomers have known for centuries that stars have different colors. When looking at an electromagnetic spectrum, ultraviolet waves are the shortest, and infrared are the longest. The visible spectrum has wavelengths between these two extremes.

Modern instruments can measure very precisely the color of a star. This allows astronomers to determine that star's temperature, because a hotter star's black-body radiation has shorter wavelengths. The hottest stars are blue and violet, then white, then yellow, and the coolest are red. Knowing the color and absolute magnitude, astronomers can place the star on the Hertzsprung-Russell diagram, and estimate its habitable zone and other facts about it.

For example, our Sun is white, and the Earth is the perfect distance away for life. If our Sun was a hotter, blue star, however, Earth would have to be much farther away or else it would be too hot to have water and sustain life.

All content from Kiddle encyclopedia articles (including the article images and facts) can be freely used under Attribution-ShareAlike license, unless stated otherwise. Cite this article:
Star Facts for Kids. Kiddle Encyclopedia.