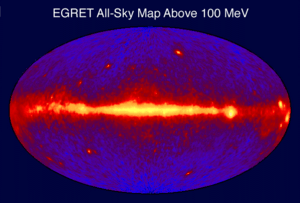 Image of entire sky in 100 MeV or greater gamma rays as seen by the EGRET instrument aboard the CGRO spacecraft. Bright spots within the galactic plane are pulsars while those above and below the plane are thought to be quasars.

Gamma rays (γ-rays) are electromagnetic waves with the smallest wavelengths in the electromagnetic spectrum. They were discovered in 1900 by Paul Villard, and named in 1903 by Ernest Rutherford.

Gamma rays are like x-rays, but the waves are smaller in wavelength. Both gamma rays and x-rays are photons with very high energies, and gamma have even more energy. They are also a type of ionizing radiation. Gamma rays can travel through thicker materials than x-rays can.

Gamma rays can also go through the skin to kill cells, such as cancerous cells. Doctors can use radiation therapy machines which produce gamma rays in hospitals to treat people with some types of cancer.

All content from Kiddle encyclopedia articles (including the article images and facts) can be freely used under Attribution-ShareAlike license, unless stated otherwise. Cite this article:
Gamma ray Facts for Kids. Kiddle Encyclopedia.