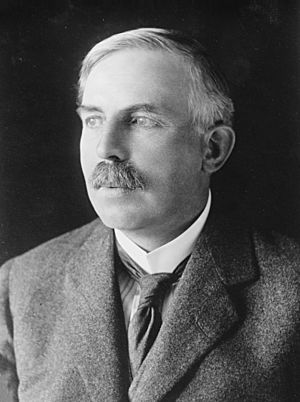 Ernest Rutherford, 1st Baron Rutherford of Nelson, OM, PC, FRS (30 August 1871 – 19 October 1937) was a New Zealand-born British scientist, who won the Nobel Prize in Chemistry in 1908, for his work on nuclear physics, and for the theory of the structure of the atom.

Rutherford was one of the first researchers in nuclear physics, after the discovery of radiation by the French physicist Henri Becquerel in 1896. Rutherford discovered the radioactive half-life, and the three parts of radiation which he named Alpha, Beta, and Gamma. He also discovered that alpha particles were the nuclei of Helium. Rutherford's Geiger–Marsden experiment led to what we know today about the atomic structure, where the atom is a nucleus and electrons orbit around it.

In 1919, Rutherford made the world's first artificial nuclear reaction, where he put alpha particles with nitrogen gas and created particles of oxygen isotopes and protons. This was nuclear transmutation, changing nitrogen gas into oxygen gas.

Rutherford College, a school in Auckland, New Zealand, was named after him.

All content from Kiddle encyclopedia articles (including the article images and facts) can be freely used under Attribution-ShareAlike license, unless stated otherwise. Cite this article:
Ernest Rutherford Facts for Kids. Kiddle Encyclopedia.