In 1897, Thomson showed that cathode rays were composed of previously unknown negatively charged particles, which he calculated must have bodies much smaller than atoms and a very large value for their charge-to-mass ratio. Thomson is also credited with finding the first evidence for isotopes of a stable (non-radioactive) element in 1913, as part of his exploration into the composition of canal rays (positive ions). His experiments to determine the nature of positively charged particles, with Francis William Aston, were the first use of mass spectrometry and led to the development of the mass spectrograph.

Thomson was awarded the 1906 Nobel Prize in Physics for his work on the conduction of electricity in gases.

Joseph John Thomson was born 18 December 1856 in Cheetham Hill, Manchester, Lancashire, England. His mother, Emma Swindells, came from a local textile family. His father, Joseph James Thomson, ran an antiquarian bookshop founded by a great-grandfather. He had a brother, Frederick Vernon Thomson, who was two years younger than he was. J. J. Thomson was a reserved yet devout Anglican.

His early education was in small private schools where he demonstrated outstanding talent and interest in science. In 1870 he was admitted to Owens College in Manchester (now University of Manchester) at the unusually young age of 14. His parents planned to enroll him as an apprentice engineer to Sharp-Stewart & Co, a locomotive manufacturer, but these plans were cut short when his father died in 1873.

On 22 December 1884 Thomson was appointed Cavendish Professor of Physics at the University of Cambridge. The appointment caused considerable surprise, given that candidates such as Osborne Reynolds or Richard Glazebrook were older and more experienced in laboratory work. Thomson was known for his work as a mathematician, where he was recognized as an exceptional talent.

He was awarded a Nobel Prize in 1906, "in recognition of the great merits of his theoretical and experimental investigations on the conduction of electricity by gases." He was knighted in 1908 and appointed to the Order of Merit in 1912. In 1914 he gave the Romanes Lecture in Oxford on "The atomic theory". In 1918 he became Master of Trinity College, Cambridge, where he remained until his death. Joseph John Thomson died on 30 August 1940; his ashes rest in Westminster Abbey, near the graves of Sir Isaac Newton and his former student, Ernest Rutherford.

One of Thomson's greatest contributions to modern science was in his role as a highly gifted teacher. One of his students was Ernest Rutherford, who later succeeded him as Cavendish Professor of Physics. In addition to Thomson himself, six of his research assistants (Charles Glover Barkla, Niels Bohr, Max Born, William Henry Bragg, Owen Willans Richardson and Charles Thomson Rees Wilson) won Nobel Prizes in physics, and two (Francis William Aston and Ernest Rutherford) won Nobel prizes in chemistry. In addition, Thomson's son (George Paget Thomson) won the 1937 Nobel Prize in physics for proving the wave-like properties of electrons.

Thomson published a number of papers addressing both mathematical and experimental issues of electromagnetism. He examined the electromagnetic theory of light of James Clerk Maxwell, introduced the concept of electromagnetic mass of a charged particle, and demonstrated that a moving charged body would apparently increase in mass.

Much of his work in mathematical modelling of chemical processes can be thought of as early computational chemistry. In further work, published in book form as Applications of dynamics to physics and chemistry (1888), Thomson addressed the transformation of energy in mathematical and theoretical terms, suggesting that all energy might be kinetic. 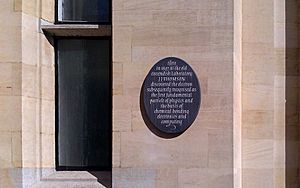 Plaque commemorating J. J. Thomson's discovery of the electron outside the old Cavendish Laboratory in Cambridge

In 1905, Thomson discovered the natural radioactivity of potassium. In 1906, Thomson demonstrated that hydrogen had only a single electron per atom. Previous theories allowed various numbers of electrons.

In 1991, the thomson (symbol: Th) was proposed as a unit to measure mass-to-charge ratio in mass spectrometry in his honour.

J J Thomson Avenue, on the University of Cambridge campus, is named after Thomson. In November 1927, J.J. Thomson opened the Thomson building, named in his honour, in the Leys School, Cambridge.

Thomson was elected a Fellow of the Royal Society (FRS) and appointed to the Cavendish Professorship of Experimental Physics at the Cavendish Laboratory, University of Cambridge in 1884. Thomson won numerous awards and honours during his career including:

All content from Kiddle encyclopedia articles (including the article images and facts) can be freely used under Attribution-ShareAlike license, unless stated otherwise. Cite this article:
J. J. Thomson Facts for Kids. Kiddle Encyclopedia.