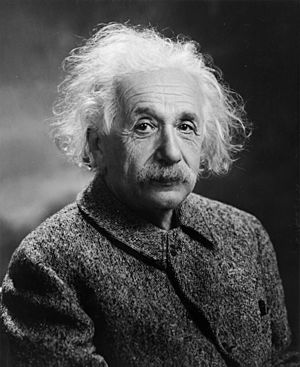 Albert Einstein, a key theoretical physicist in the 20th century who developed the theory of relativity and parts of early quantum theory. 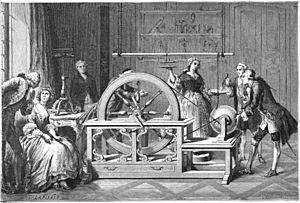 In an 18th-century experiment in "natural philosophy" (later to be called "physics") English scientist Francis Hauksbee works with an early electrostatic generator. 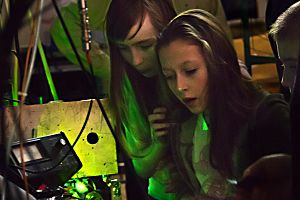 Students observing a demonstration at a laser physics institute

A physicist is a scientist who specializes in the field of physics, which encompasses the interactions of matter and energy at all length and time scales in the physical universe. Physicists generally are interested in the root or ultimate causes of phenomena, and usually frame their understanding in mathematical terms. Physicists work across a wide range of research fields, spanning all length scales: from sub-atomic and particle physics, through biological physics, to cosmological length scales encompassing the universe as a whole. The field generally includes two types of physicists: experimental physicists who specialize in the observation of physical phenomena and the analysis of experiments, and theoretical physicists who specialize in mathematical modeling of physical systems to rationalize, explain and predict natural phenomena. Physicists can apply their knowledge towards solving practical problems or to developing new technologies (also known as applied physics or engineering physics).

Here are some famous physicists:

All content from Kiddle encyclopedia articles (including the article images and facts) can be freely used under Attribution-ShareAlike license, unless stated otherwise. Cite this article:
Physicist Facts for Kids. Kiddle Encyclopedia.