James Watt (30 January 1736 (19 January 1736 OS) – 25 August 1819) was a Scottish inventor, mechanical engineer, and chemist who improved on Thomas Newcomen's 1712 Newcomen steam engine with his Watt steam engine in 1781, which was fundamental to the changes brought by the Industrial Revolution in both his native Great Britain and the rest of the world.

While working as an instrument maker at the University of Glasgow, Watt became interested in the technology of steam engines. He realised that contemporary engine designs wasted a great deal of energy by repeatedly cooling and reheating the cylinder. Watt introduced a design enhancement, the separate condenser, which avoided this waste of energy and improved the power, efficiency, and cost-effectiveness of steam engines. Eventually he adapted his engine to produce rotary motion, greatly broadening its use beyond pumping water.

Watt attempted to commercialise his invention, but experienced great financial difficulties until he entered a partnership with Matthew Boulton in 1775. The new firm of Boulton and Watt was eventually highly successful and Watt became a wealthy man. In his retirement, Watt continued to develop new inventions though none was as significant as his steam engine work. He died in 1819 aged 83.

He developed the concept of horsepower, and the SI unit of power, the watt, was named after him.

Watt and the kettle 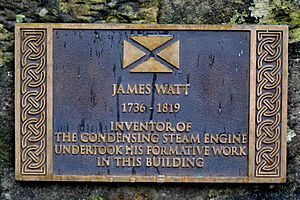 This is difficult to explain to someone not familiar with concepts of heat and thermal efficiency. It appears that the story of Watt and the kettle was created, possibly by Watt's son James Watt Jr., and persists because it is easy for children to understand and remember. In this light it can be seen as akin to the story of Isaac Newton, the falling apple and his discovery of gravity.

Although it is often dismissed as a myth, like most good stories the story of James Watt and the kettle has a basis in fact. In trying to understand the thermodynamics of heat and steam James Watt carried out many laboratory experiments and his diaries record that in conducting these he used a kettle as a boiler to generate steam. 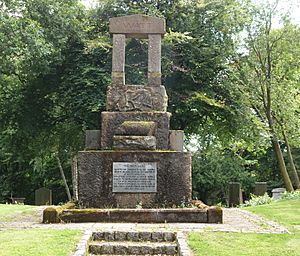 Watt retired in 1800, the same year that his fundamental patent and partnership with Boulton expired. Watt continued to invent other things before and during his semi-retirement. He maintained his interest in civil engineering and was a consultant on several significant projects. He proposed, for example, a method for constructing a flexible pipe to be used for pumping water under the Clyde at Glasgow.

He and his second wife travelled to France and Germany, and he purchased an estate in mid-Wales at Doldowlod House, one mile south of Llanwrthwl, which he much improved. In 1816 he took a trip on the paddle-steamer Comet, a product of his inventions, to revisit his home town of Greenock.

He died on 25 August 1819 at his home "Heathfield" in Handsworth, Staffordshire (now part of Birmingham) at the age of 83. He was buried on 2 September in the graveyard of St Mary's Church, Handsworth. The church has since been extended and his grave is now inside the church.

All content from Kiddle encyclopedia articles (including the article images and facts) can be freely used under Attribution-ShareAlike license, unless stated otherwise. Cite this article:
James Watt Facts for Kids. Kiddle Encyclopedia.