His book, An Inquiry into the Nature and Causes of the Wealth of Nations, published in 1776, was very important. People call the book just The Wealth of Nations. It stated some of the ideas on which modern economics is based off, especially market economics.

In the Wealth of Nations Adam Smith asks 'what can a person do that is best for his country?' He decides that if every person does what is best for themselves and their little circle of family and friends, then the country will do better. This is because every person knows a lot about their own situation (what they need and what they want, what works and what does not work), much more than the government knows. This sort of thinking is called "liberal theory", a main part of liberalism.

He was also a philosopher who wanted to know why people thought (felt) that some things are good and others bad.

He wrote an earlier book, in 1759, called The Theory of Moral Sentiments. He thought that empathy was very important in ethics. Empathy is when you see how someone else is feeling, imagine what it feels like, and then end up feeling the same way: for Smith, empathy is like "putting yourself in someone else's shoes". For example, empathy makes us feel happy to see someone else who is happy, or feel sorry for someone who is sad. Empathy may even make us feel pain when we see someone in pain (as if we had been hurt or affected). Both Smith and his friend David Hume, who was another Scottish philosopher, wrote about the importance of empathy in ethics.

Adam Smith was born in Kirkcaldy, Scotland. The exact date of his birth is unknown, but he was baptized on June 16, 1723. His father, also Adam Smith, died just two months before he was born, leaving his mother, Margaret, a widow. From 1729 to 1737, he attended the Burgh School of Kirkcaldy and learned Latin, mathematics, history, and writing. When Smith was 14, he began attending the University of Glasgow. There he studied moral philosophy under the famous philosopher Francis Hutcheson. He later went to Oxford University in England, but he thought the teaching was better at the University of Glasgow, which is in Scotland.

Adam Smith began giving lectures at the University of Edinburgh, in Scotland, in 1748. He met David Hume in 1750. Hume and Smith became good friends because they shared a love for philosophy and economics.

In 1751, Smith became a professor at his beloved Glasgow University, where he became the head of Moral Philosophy. After he published his first book, The Theory of Moral Sentiments, he began to teach more about economics and jurisprudence (the study of law) in his classes. In 1762, he earned the title of Doctor of Laws (LL.D.) at Glasgow. Shortly afterward, he resigned from teaching at the university and began tutoring Henry Scott, the nephew of Charles Townshend. 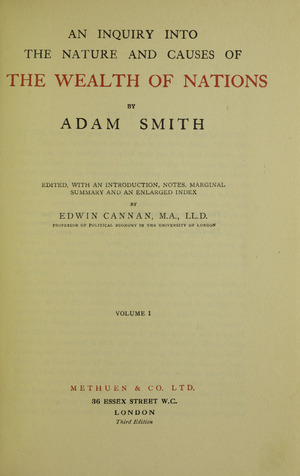 Inquiry into the nature and causes of the wealth of nations, 1922

While Smith was teaching at Glasgow, he published a book called The Theory of Moral Sentiments in 1759. This book discussed mutual sympathy, or empathy, which is the ability to recognize the feelings that are being felt by another person. His book made him so popular that many wealthy students left their schools in other countries to come and study at the University of Glasgow.

After Henry Scott's younger brother died in Paris, Adam Smith returned home to live with his mother and to write his most famous work, An Inquiry into the Nature and Causes of the Wealth of Nations. This book is usually called The Wealth of Nations. In it, Smith described some new economic ideas that still influence societies today. Here are three: 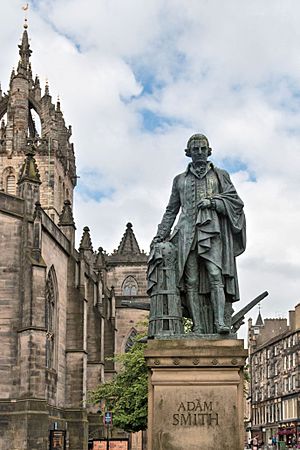 A statue of Smith in Edinburgh's High Street, erected through private donations organised by the Adam Smith Institute

Adam Smith died in Edinburgh, Scotland, in 1790. His book The Wealth of Nations was the first important book on the subject of economics. Many countries today still use the ideas about market economics that he presented.

All content from Kiddle encyclopedia articles (including the article images and facts) can be freely used under Attribution-ShareAlike license, unless stated otherwise. Cite this article:
Adam Smith Facts for Kids. Kiddle Encyclopedia.