The Wealth of Nations facts for kids 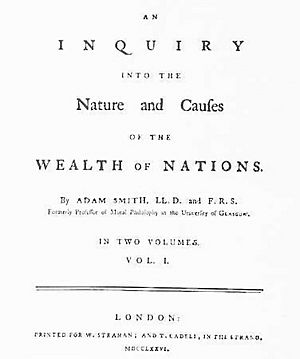 The Wealth of Nations

An Inquiry into the Nature and Causes of the Wealth of Nations is better known simply as The Wealth of Nations. It was written by Adam Smith in 1776, who was a Scottish man. It looks at division of work, following self-interest, and freedom of trade.

The book was not the beginning of classical economics, and market economics. Smith said that if everyone did what was best for themselves, the result would be best for society. Before that, economics was about the king's personal interests, and the wealth of a nation was measured by the king's treasury or by the gold and silver in the country.

Smith said what's important is what's best for the whole nation, and that wealth should be measured by the yearly income of the nation. He wanted to discover how wealth can grow, and how people could do things to support that growth. Smith's book said land, labour, and capital were the three "factors of production" and the main contributors to a nation's wealth. 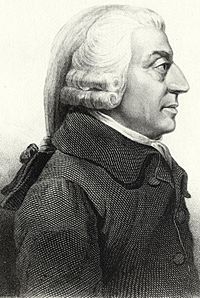 Prices naturally adjust to having more or less of something: supply and demand. If there is too much of something (more supply), prices go down so that people have more reason to buy it. If a lot of people want something (high demand), there may not be enough of it (scarcity); there will be a competition among the people who want to buy it, and some people will agree to pay more to get what they want, and prices go up.

Smith said markets should be free. At the time, some big companies (like the East India Company) were controlled by the government. Sometimes the rulers made laws that were good for themselves but not for workers or customers. For example, in the American colonies, colonists could grow cotton but were not allowed to make clothing from it. They had to ship it to England to be made into clothing, then buy it back after it was finished. Smith said this was bad for individuals and for society. He thought it was better for money to flow freely and naturally between buyers and sellers without outside interference. Money would naturally go to the sellers who made the best product at the best price. This way if people did what was best for them, it would end up being best for society as a whole, almost like an "invisible hand" was guiding everything.

All content from Kiddle encyclopedia articles (including the article images and facts) can be freely used under Attribution-ShareAlike license, unless stated otherwise. Cite this article:
The Wealth of Nations Facts for Kids. Kiddle Encyclopedia.