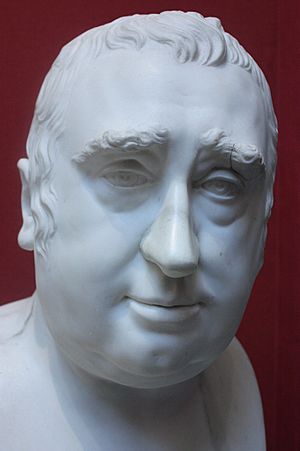 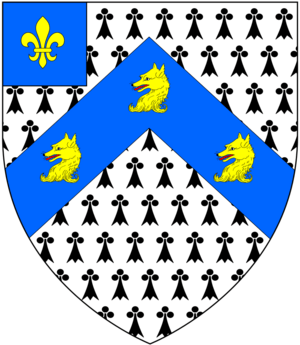 Canting arms of Fox, Baron Holland: Ermine, on a chevron azure three fox's heads and necks erased or on a canton of the second a fleur-de-lys of the third

Charles James Fox (24 January 1749 – 13 September 1806), styled The Honourable from 1762, was a prominent British Whig statesman whose parliamentary career spanned 38 years of the late 18th and early 19th centuries. He was the arch-rival of the Tory politician William Pitt the Younger; his father Henry Fox, 1st Baron Holland, a leading Whig of his day, had similarly been the great rival of Pitt's famous father, William Pitt, 1st Earl of Chatham ("Pitt the Elder").

Fox rose to prominence in the House of Commons as a forceful and eloquent speaker with a notorious and colourful private life, though at that time with rather conservative and conventional opinions. However, with the coming of the American War of Independence and the influence of the Whig Edmund Burke, Fox's opinions evolved into some of the most radical to be aired in the British Parliament of his era.

Fox became a prominent and staunch opponent of King George III, whom he regarded as an aspiring tyrant. He supported the American Patriots and even dressed in the colours of George Washington's army. Briefly serving as Britain's first Foreign Secretary during the ministry of the Marquess of Rockingham in 1782, he returned to the post in a coalition government with his old enemy, Lord North, in 1783. However, the King forced Fox and North out of government before the end of the year and replaced them with the 24-year-old Pitt the Younger. Fox spent the following 22 years facing Pitt and the government from the opposition benches of the House of Commons.

Though Fox had little interest in the actual exercise of power and spent almost the entirety of his political career in opposition, he became noted as an anti-slavery campaigner, a supporter of the French Revolution and a leading parliamentary advocate of religious tolerance and individual liberty. His friendship with his mentor, Burke, and his parliamentary credibility were both casualties of Fox's support for France during the French Revolutionary Wars, but Fox went on to attack Pitt's wartime legislation and to defend the liberty of religious minorities and political radicals. After Pitt's death in January 1806, Fox served briefly as Foreign Secretary in the 'Ministry of All the Talents' of William Grenville before he died on 13 September 1806, aged 57.

All content from Kiddle encyclopedia articles (including the article images and facts) can be freely used under Attribution-ShareAlike license, unless stated otherwise. Cite this article:
Charles James Fox Facts for Kids. Kiddle Encyclopedia.