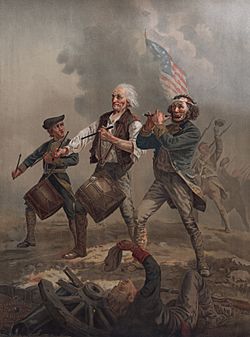 The Spirit of '76 (originally entitled Yankee Doodle), painted by Archibald Willard in the late nineteenth century, an iconic image relating to the patriotic spirit surrounding the American Revolutionary War

Patriots (also known as Revolutionaries, Continentals, Rebels, or American Whigs) were those colonists of the Thirteen Colonies who rejected British rule during the American Revolution and declared the United States of America as an independent nation in July 1776. Their decision was based on the political philosophy of republicanism as expressed by spokesmen such as Thomas Jefferson, John Adams, and Thomas Paine. They were opposed by the Loyalists who supported continued British rule.

Patriots represented the spectrum of social, economic, and ethnic backgrounds. They included lawyers such as John Adams, students such as Alexander Hamilton, planters such as Thomas Jefferson and George Mason, merchants such as Alexander McDougall and John Hancock, and farmers such as Daniel Shays and Joseph Plumb Martin. They also included slaves and freemen such as Crispus Attucks, the first casualty of the American Revolution; James Armistead Lafayette, who served as a double agent for the Continental Army; and Jack Sisson, leader of the first successful black operation mission in American history under the command of Colonel William Barton, resulting in the capture of British General Richard Prescott.

The critics of British policy towards the colonies called themselves "Whigs" after 1768, identifying with members of the British Whig party who favored similar colonial policies. In Britain at the time, the word "patriot" had a negative connotation and was used as a negative epithet for "a factious disturber of the government", according to Samuel Johnson.

Prior to the Revolution, colonists who supported British authority called themselves Tories or royalists, identifying with the political philosophy of traditionalist conservatism dominant in Great Britain. During the Revolution, these persons became known primarily as Loyalists. Afterward, some 15% of Loyalists emigrated north to the remaining British territories in Canada. There they called themselves the United Empire Loyalists. 85% of the Loyalists decided to stay in the new United States and were granted American citizenship.

Many Patriots were active before 1775 in groups such as the Sons of Liberty, and the most prominent leaders are referred to today by Americans as the Founding Fathers. They represented a cross-section of the population of the Thirteen Colonies and came from many different backgrounds. According to Robert Calhoon, between 40 and 45 percent of the white population in the Thirteen Colonies supported the Patriots' cause, between 15 and 20 percent supported the Loyalists, and the remainder were neutral or kept a low profile. The great majority of the Loyalists remained in America, while the minority went to Canada, Britain, Florida, or the West Indies.

Historians have explored the motivations that pulled men to one side or the other. Yale historian Leonard Woods Labaree used the published and unpublished writings and letters of leading men on each side, searching for how personality shaped their choice. He finds eight characteristics that differentiated the two groups. Loyalists were older, better established, and more likely to resist innovation than the Patriots. Loyalists felt that the Crown was the legitimate government and resistance to it was morally wrong, while the Patriots felt that morality was on their side because the British government had violated the constitutional rights of Englishmen. Men who were alienated by physical attacks on Royal officials took the Loyalist position, while those who were offended by heavy-handed British response to actions such as the Boston Tea Party became Patriots. Merchants in the port cities with long-standing financial attachments to Britain were likely to remain loyal to the system, while few Patriots were so deeply enmeshed in the system. Some Loyalists, according to Labaree, were "procrastinators" who believed that independence was bound to come some day, but wanted to "postpone the moment", while the Patriots wanted to "seize the moment". Loyalists were cautious and afraid of anarchy or tyranny that might come from mob rule; Patriots made a systematic effort to take a stand against the British government. Finally, Labaree argues that Loyalists were pessimists who lacked the Patriots' confidence that independence lay ahead.

The Patriots rejected taxes imposed by legislatures in which the taxpayer was not represented. "No taxation without representation" was their slogan, referring to the lack of representation in the British Parliament. The British countered that there was "virtual representation" in the sense that all members of Parliament represented the interests of all the citizens of the British Empire. Some Patriots declared that they were loyal to the king, but they insisted that they should be free to run their own affairs. In fact, they had been running their own affairs since the period of "salutary neglect" before the French and Indian War. Some radical Patriots tarred and feathered tax collectors and customs officers, making those positions dangerous; according to Benjamin Irvin, the practice was especially prevalent in Boston where many Patriots lived.

All content from Kiddle encyclopedia articles (including the article images and facts) can be freely used under Attribution-ShareAlike license, unless stated otherwise. Cite this article:
Patriot (American Revolution) Facts for Kids. Kiddle Encyclopedia.