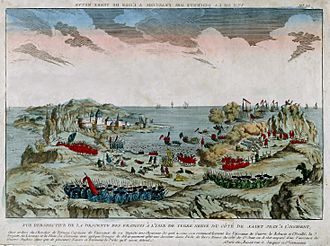 The descent of the French on St. John's, Newfoundland, 1762

The French and Indian War took place between 1754 and 1763 in British North America and French North America. These are now the United States and Canada. The French had Native American allies and the British had other Indian allies. The war is also called "the Seven Years' War".

The conflict was a part of the Seven Years' War among the European great powers including Britain and France, which took place in various parts of the world. France was already fighting Prussia, and did not send many troops to Canada.

France built a new fort in the disputed territory and the British decided to expel them. Fighting began with the Battle of Monongahela in 1755. General Edward Braddock, the commander, died with many of his men in a failed attack against the French in what later became Pittsburgh. Militia officer George Washington led the defeated survivors home.

In the Battle of the Plains of Abraham Canada was conquered.

The fighting in North America stopped on Sept. 8, 1760 with the surrender of Montreal and all of Canada to Britain. The war ended with the signing of the Treaty of Paris on February 10, 1763. France lost all of its North American lands east of the Mississippi River. All of Canada was given to Britain except the small islands of Saint Pierre and Miquelon near Newfoundland. Britain offered France the choice to give up either its Canadian land or the Caribbean islands of Guadeloupe and Martinique, which British troops had taken during the war. France chose to keep the islands, which were valuable for their sugar plantations.

With the Royal Proclamation of 1763, British North American colonists became unhappy over their share of the winnings, eventually leading to the American Revolution.

All content from Kiddle encyclopedia articles (including the article images and facts) can be freely used under Attribution-ShareAlike license, unless stated otherwise. Cite this article:
French and Indian War Facts for Kids. Kiddle Encyclopedia.