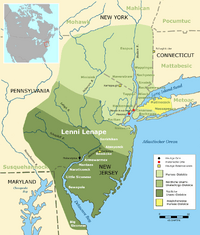 A map of the area where the Lenape lived.

The Lenape, Lenappe, Lenapi or Lenni Lenape (meaning "the people" or "true people") are a group of several bands of Native American people who share cultural and linguistic traits. They are also known as the Delaware Indians. They spoke two similar languages known as the Delaware languages: Unami and Munsee.

The Lenape lived in the area called Lenapehoking, roughly the area around and between the Delaware and lower Hudson Rivers. These areas are known today as the U.S. states of New Jersey, eastern Pennsylvania around the Delaware and Lehigh valleys. They also lived on the north shore of Delaware and much of southeastern New York, mostly the lower Hudson Valley and Upper New York Bay. Nowadays most live in Oklahoma, Wisconsin and Ontario.

All content from Kiddle encyclopedia articles (including the article images and facts) can be freely used under Attribution-ShareAlike license, unless stated otherwise. Cite this article:
Lenape Facts for Kids. Kiddle Encyclopedia.