Delaware is a state located in the Mid-Atlantic and/or Northeastern regions of the United States. It is bordered to the south and west by Maryland, to the northeast by New Jersey, and to the north by Pennsylvania. The state takes its name from Thomas West, 3rd Baron De La Warr, an English nobleman and Virginia's first colonial governor.

Delaware occupies the northeastern portion of the Delmarva Peninsula and is the second smallest, the sixth least populous, but the sixth most densely populated of the 50 United States.

Delaware is divided into three counties, the lowest number of counties of any state.

Before its coastline was explored by Europeans in the 16th century, Delaware was inhabited by several groups of Native Americans, including the Lenape in the north and Nanticoke in the south.

It was initially colonized by Dutch traders at Zwaanendael, near the present town of Lewes, in 1631.

Delaware was one of the 13 colonies participating in the American Revolution. On December 7, 1787, Delaware became the first state to ratify the Constitution of the United States, and has since promoted itself as "The First State".

The state was named after the Delaware River, which in turn derived its name from Thomas West, 3rd Baron De La Warr (1577–1618) who was the ruling governor of the Colony of Virginia at the time Europeans first explored the river. The Delaware Indians, a name used by Europeans for Lenape people indigenous to the Delaware Valley, also derive their name from the same source.

The surname de La Warr comes from Sussex and is of Anglo-Norman origin. 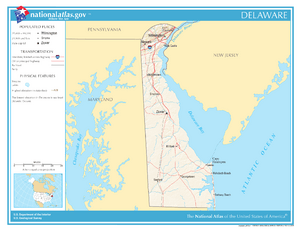 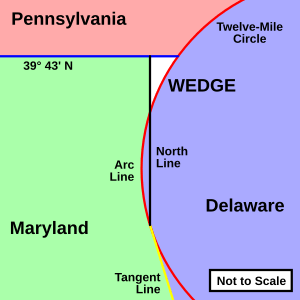 Diagram of the Twelve-Mile Circle, the Mason–Dixon line and "The Wedge". All blue and white areas are inside Delaware. 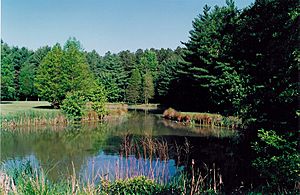 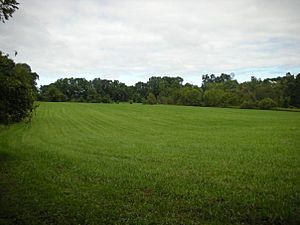 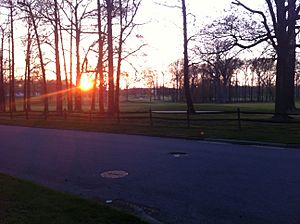 Delaware is 96 miles (154 km) long and ranges from 9 miles (14 km) to 35 miles (56 km) across, totaling 1,954 square miles (5,060 km2), making it the second-smallest state in the United States after Rhode Island. Delaware is bounded to the north by Pennsylvania; to the east by the Delaware River, Delaware Bay, New Jersey and the Atlantic Ocean; and to the west and south by Maryland. Small portions of Delaware are also situated on the eastern side of the Delaware River sharing land boundaries with New Jersey. The state of Delaware, together with the Eastern Shore counties of Maryland and two counties of Virginia, form the Delmarva Peninsula, which stretches down the Mid-Atlantic Coast.

The definition of the northern boundary of the state is unusual. Most of the boundary between Delaware and Pennsylvania was originally defined by an arc extending 12 miles (19.3 km) from the cupola of the courthouse in the city of New Castle.

This border extends all the way east to the low-tide mark on the New Jersey shore, then continues south along the shoreline until it again reaches the 12-mile (19 km) arc in the south; then the boundary continues in a more conventional way in the middle of the main channel (thalweg) of the Delaware River. To the west, a portion of the arc extends past the easternmost edge of Maryland. The remaining western border runs slightly east of due south from its intersection with the arc. The Wedge of land between the northwest part of the arc and the Maryland border was claimed by both Delaware and Pennsylvania until 1921, when Delaware's claim was confirmed.

Since almost all of Delaware is a part of the Atlantic coastal plain, the effects of the ocean moderate its climate. The state lies in the humid subtropical climate zone. Despite its small size (roughly 100 miles (160 km) from its northernmost to southernmost points), there is significant variation in mean temperature and amount of snowfall between Sussex County and New Castle County. Moderated by the Atlantic Ocean and Delaware Bay, the southern portion of the state has a milder climate and a longer growing season than the northern portion of the state. Delaware's all-time record high of 110 °F (43 °C) was recorded at Millsboro on July 21, 1930. The all-time record low of −17 °F (−27 °C) was also recorded at Millsboro on January 17, 1893.

The transitional climate of Delaware supports a wide variety of vegetation. In the northern third of the state are found Northeastern coastal forests and mixed oak forests typical of the northeastern United States. In the southern two-thirds of the state are found Middle Atlantic coastal forests. Trap Pond State Park, along with areas in other parts of Sussex County, for example, support the northernmost stands of bald cypress trees in North America.

Before Delaware was settled by European colonists, the area was home to the Eastern Algonquian tribes known as the Unami Lenape or Delaware throughout the Delaware valley, and the Nanticoke along the rivers leading into the Chesapeake Bay.

The Unami Lenape in the Delaware Valley were closely related to Munsee Lenape tribes along the Hudson River. They had a settled hunting and agricultural society, and they rapidly became middlemen in an increasingly frantic fur trade with their ancient enemy, the Minqua or Susquehannock.

With the loss of their lands on the Delaware River and the destruction of the Minqua by the Iroquois of the Five Nations in the 1670s, the remnants of the Lenape who wished to remain identified as such left the region and moved over the Alleghany Mountains by the mid-18th century. 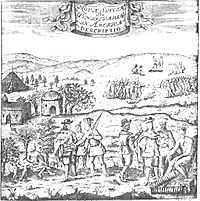 New Sweden – encounter between Swedish colonists and the natives of Delaware.

The Dutch were the first Europeans to settle in present-day Delaware in the Middle region by establishing a trading post at Zwaanendael, near the site of Lewes in 1631.

Within a year all the settlers were killed in a dispute with area Native American Tribes.

In 1638 New Sweden, a Swedish trading post and colony, was established at Fort Christina (now in Wilmington) by Peter Minuit at the head of a group of Swedes, Finns and Dutch. The colony of New Sweden lasted for 17 years.

In 1651 the Dutch established a fort at present-day New Castle, and in 1655 they conquered the New Sweden colony, annexing it into the Dutch New Netherland. Only nine years later, in 1664, the Dutch were conquered by a fleet of English ships by Sir Robert Carr under the direction of James, the Duke of York. Fighting off a prior claim by Cecil Calvert, 2nd Baron Baltimore, Proprietor of Maryland, the Duke passed his somewhat dubious ownership on to William Penn in 1682. Penn strongly desired access to the sea for his Pennsylvania province and leased what then came to be known as the "Lower Counties on the Delaware" from the Duke.

Penn established representative government and briefly combined his two possessions under one General Assembly in 1682. However, by 1704 the Province of Pennsylvania had grown so large that their representatives wanted to make decisions without the assent of the Lower Counties and the two groups of representatives began meeting on their own, one at Philadelphia, and the other at New Castle. Penn and his heirs remained proprietors of both and always appointed the same person Governor for their Province of Pennsylvania and their territory of the Lower Counties. The fact that Delaware and Pennsylvania shared the same governor was not unique. From 1703 to 1738 New York and New Jersey shared a governor. Massachusetts and New Hampshire also shared a governor for some time.

Dependent in early years on indentured labor, Delaware imported more slaves as the number of English immigrants decreased with better economic conditions in England. The colony became a slave society and cultivated tobacco as a cash crop, although English immigrants continued to arrive.

Initially led by John Haslet, Delaware provided one of the premier regiments in the Continental Army, known as the "Delaware Blues" and nicknamed the "Blue Hen's Chicks." In August 1777 General Sir William Howe led a British army through Delaware on his way to a victory at the Battle of Brandywine and capture of the city of Philadelphia. The only real engagement on Delaware soil was the Battle of Cooch's Bridge, fought on September 3, 1777, at Cooch's Bridge in New Castle County.

Many colonial settlers came to Delaware from Maryland and Virginia, which had been experiencing a population boom. The economies of these colonies were chiefly based on tobacco culture and were increasingly dependent on slave labor for its intensive cultivation. Most of the English colonists arrived as indentured servants, under contracts to work as laborers for a fixed period to pay for their passage. In the early years the line between indentured servants and African slaves or laborers was fluid, and the working classes often lived closely together. Most of the free African-American families in Delaware before the Revolution had migrated from Maryland to find more affordable land. They were descendants chiefly of relationships or marriages between white servant women and enslaved, servant or free African or African-American men. As the flow of indentured laborers to the colony decreased with improving economic conditions in England, more slaves were imported for labor and the caste lines hardened.

At the end of the colonial period, the number of enslaved people in Delaware began to decline.

Although attempts to abolish slavery failed by narrow margins in the legislature, in practical terms, the state had mostly ended the practice.

According to the 2010 United States Census, Delaware had a population of 897,934. The racial composition of the state was:

Ethnically, Hispanics and Latinos of any race made up 8.2% of the population.

As of 2011[update], 49.7% of Delaware's population younger than one year of age belonged to minority groups (i.e., did not have two parents of non-Hispanic white ancestry). In 2000 approximately 19% of the population were African-American and 5% of the population is Hispanic (mostly of Puerto Rican or Mexican ancestry). 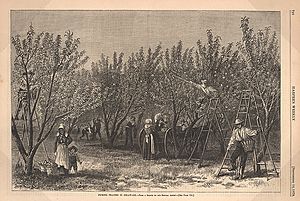 "Picking Peaches in Delaware" from an 1878 issue of Harper's Weekly

Dover Air Force Base, located next to the state capital of Dover, is one of the largest Air Force bases in the country and is a major employer in Delaware. In addition to its other responsibilities in the United States Air Force Air Mobility Command, this air base serves as the entry point for American military personnel and some U.S. government civilians who die overseas.

There are also several state highways that cross the state of Delaware.

The state also operates two toll highways, the Delaware Turnpike, which is I-95, between Maryland and New Castle and the Korean War Veterans Memorial Highway, which is DE 1, between Wilmington and Dover.

A bicycle route, Delaware Bicycle Route 1, spans the north-south length of the state from the Maryland border in Fenwick Island to the Pennsylvania border north of Montchanin. It is the first of several signed bike routes planned in Delaware.

Delaware has around 1,450 bridges. 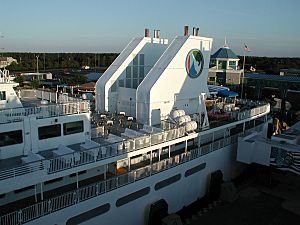 There are three ferries that operate in the state of Delaware:

Wilmington is the state's largest city and its economic hub. It is located within commuting distance of both Philadelphia and Baltimore. All regions of Delaware are enjoying phenomenal growth, with Dover and the beach resorts expanding at a rapid rate. 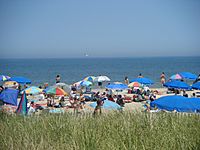 Rehoboth Beach is a popular vacation spot during the summer months 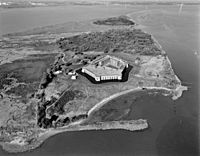 Fort Delaware State Park on Pea Patch Island is a popular spot during the spring and summer. A ferry takes visitors to the fort from nearby Delaware City.

Rehoboth Beach, together with the towns of Lewes, Dewey Beach, Bethany Beach, South Bethany, and Fenwick Island, comprise Delaware's beach resorts. Rehoboth Beach often bills itself as "The Nation's Summer Capital" because it is a frequent summer vacation destination for Washington, D.C. residents as well as visitors from Maryland, Virginia, and in lesser numbers, Pennsylvania. Vacationers are drawn for many reasons, including the town's charm, artistic appeal, nightlife, and tax free shopping.

All content from Kiddle encyclopedia articles (including the article images and facts) can be freely used under Attribution-ShareAlike license, unless stated otherwise. Cite this article:
Delaware Facts for Kids. Kiddle Encyclopedia.