Coccinella septempunctata, the seven-spot ladybird, is the most common ladybird in Europe. Its elytra are of a red colour, but punctuated with three black spots each, with one further spot being spread over the junction of the two, making a total of seven spots, from which the species derives both its common and scientific names (from the Latin septem = "seven" and punctus = "spot"). 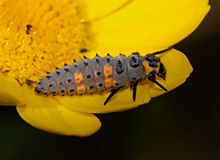 A larva of C. septempunctata

C. septempunctata has a broad ecological range, generally living where there are aphids for it to eat and because of this, has been repeatedly introduced to North America as a biological control agent to reduce aphid numbers, and is now established in North America.

An adult seven-spot ladybird may reach a body length of 7.6–10.0 mm (0.3–0.4 in). Their distinctive spots and attractive colours apparently make them unappealing to predators. The species can secrete a fluid from joints in their legs which gives them a foul taste. A threatened ladybird may both play dead and secrete the unappetizing substance to protect itself. The spot size and coloration can provide some indication of how toxic the individual bug is to potential predators.

All content from Kiddle encyclopedia articles (including the article images and facts) can be freely used under Attribution-ShareAlike license, unless stated otherwise. Cite this article:
Seven-spot ladybird Facts for Kids. Kiddle Encyclopedia.