Kids Encyclopedia Facts
This article is about the country. For the bird, see Turkey (bird). 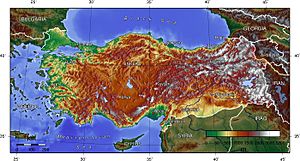 Turkey (Turkish: Türkiye) is a country in both Europe and Asia. The area of Turkey is about 780,000 square kilometres.

Turkey is a republic. There are 81 provinces in Turkey. The money of Turkey is called Turkish Lira. The capital city is Ankara, a city in central Anatolia. The cultural and economic center is Istanbul, which is in Europe. In the past Istanbul was called Constantinople. The republic was founded in 1923, after World War I and a war of independence (Kurtuluş Savaşı). Before that, Turkey was the core of the Ottoman Empire.

Many civilizations were located in the area that is now Turkey, like the Hittites, the Roman Empire and the Byzantine Empire. Many important events in the history of Christianity happened in Turkey. Because it lies in both Europe and Asia, some people see Turkey as the "door" between Europe and Asia.

Modern Turkey's warm and varied climate lets many kinds of food crops grow, and livestock and forestry are important industries. Turkey makes enough food to feed itself. Turkish manufactures include airplanes, electronics, cars, clothing and textiles for home and for other countries.

Turkey is a popular place for tourists to visit. It has hundreds of kilometers of beautiful beaches on its Aegean and Mediterranean coasts, and many important historical places. However, terrorist attacks during the 2010s have reduced its popularity.

People have been living in Anatolia (the Asian part of Turkey - also called Asia Minor) longer than almost anywhere else in the world, except Africa.

The first major empire in the area was the Hittites (during the 18th century to the 13th century BC). The Hittites, who spoke one of the Indo-European languages, developed a high culture in Central Anatolia. Their kingdom was destroyed by the Cimmerians in the 7th century BC and the successor states were Lydia, Caria and Lycia.

From 1950 BCE, Greeks and Assyrians inhabited parts of southeastern Turkey. The Assyrian capital was named Tushhan (900-600 BC). The Assyrians ruled over southeastern Turkey until the Assyrian Empire was conquered by Babylonia in the year 612 BC. Then Anatolia became home for various kingdoms including the Achaemenid Empire, Hellenistic kingdoms, Roman Empire, Byzantine Empire (Eastern Roman Empire), Seljuk Empire, and Mongol Empire.

During the 14th century, after the fall of the Mongol Empire, Lord Osman built a new empire named after himself: the Ottoman Empire. It became one of the longest existing empires of all time. The Empire also stretched across the Balkans, (Yugoslavia and Bulgaria) in Europe. The Kingdom was ruled by Muslim law, but other religions had certain minority rights.

In World War I the Ottoman Empire was one of the Central Powers. During the war, 500,000 Armenians in the Ottoman Empire were massacred in the so-called Armenian Genocide. Turkey denies that the event was genocide. The Central Powers lost the war and the Ottoman Empire was destroyed, but after that Ataturk led the army to get rid of foreign enemies, like the Greeks. Mustafa Kemal Atatürk was the first President of Turkey. He made many changes that made Turkey more modern. But some people did not like some of the things he did because they thought they were against Islam. Religious secondary schools were gotten rid of, for example.

For many years Kurdish guerrillas (usually called the "PKK") led by Abdullah Öcalan have been fighting the Turkish government. They said they were fighting so that the Kurds in the south east of Turkey could have autonomy and decide more things for themselves. But the government and most countries in the world call them terrorists. 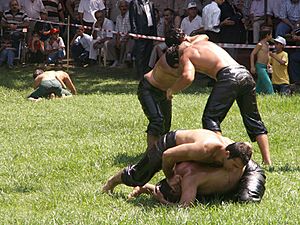 About 80 million people live in Turkey. Most of them are ethnic Turks. About 15% are ethnic Kurds. Many refugees from Syria (over 2 million) live in Turkey because they have run away from the Syrian civil war.

The vast majority of Turks are Muslim. The biggest city in Turkey is Istanbul which has the biggest population of any city in Europe.

Turkish people have many ethnic and famous foods, such as mantı (Turkish ravioli), döner, kebabs, Turkish delight, baklava, börek, köfte, and other foods.

Much of the population in Turkey is made up of teenagers and young adults.

According to a study, Anatolia is genetically more closely related to the Balkan populations than to the Central Asian populations. The Turks of Anatolia (Asian part of Turkey) have only 13% of genes from populations from Central Asia. The population is mainly from the Greeks, Armenians and Kurds.

Turkey is trying to join the European Union (EU). The EU says that before Turkey can join, it must start trading with the Republic of Cyprus and improve human rights.

Turkey is in the OECD and the G-20, and is one of the 20 richest countries. The Turkish currency is called the Lira. The first coins were made in Turkey.

In the 1970s, many Turks moved to other countries, like Germany, to escape the bad economy at the time and to get better jobs. They often come back to Turkey for their summer holidays. Today, many of the people who left in the 1970s want to move back to Turkey.

Until the 1980s the government owned most companies, but then Prime Minister Turgut Özal sold them. Before, foreigners were usually not allowed to buy companies, land or property. Earthquakes in 1994, 1999, and 2001 slowed economic growth a bit.

Turkey mostly buys and sells with the EU, the United States, the Russian Federation, and Japan. Turkey and the EU agreed not to put a lot of tax on what they buy and sell to each other. After that it was easier for Turkish factories to sell products to the EU and for business people in the EU to buy companies in Turkey.

Turkey's exports in 2010 were worth 117 billion United States dollars.

Turkey has no petroleum or natural gas so it buys them from other countries, like Russia. In 2010, oil was found in the Turkish City of Diyarbakir, but there was not enough oil to extract. Turkey is searching for natural gas in Northern Turkish Cyprus.

The capital and second-largest city of Turkey is Ankara. The largest and the most crowded city is Istanbul which is the only city in the world that has land on two different continents. The third largest city is the coastal city of Izmir which is the main port of the country. Turkey is divided into 81 provinces. Each province has its own little government but they can only make decisions about small things: the government in Ankara decides important issues. The provinces are in 7 regions. Each province is divided into districts. There are 923 districts altogether.

In Turkey there are also minorities who speak languages such as Arabic, Kurdish, Armenian, Greek or Ladino, and many others.

Many of the young adults can also speak English, which is taught throughout Middle and High school.

Turkey has a modern culture. The life style of the Turks is similar to that of the Europeans. Turkish culture is a cross between Western countries and modern Islamic culture.

Different parts of Turkey have similar but not exactly the same lifestyles. The Lifestyle in the West, South West and North West is more modern. People living in that area have modern accents. Southern Turkey also has a modern life style but Turks living by the Mediterranean have southern, much thicker, and more masculine accents than western Turkey. Northerners, by the Black Sea have softer accents and also have modern lifestyles. Eastern and South Eastern Turkey is made up of mostly Kurds. They generally have less modern and more Islamic lifestyles.

The majority of Turkey is made up of Turks. The largest?? minority is the Kurds. Kurds live mostly in South Eastern and Eastern Turkey and have poor financial situations. The second largest minority are Syrians.

Turkey's literacy rate is currently 95%. People in Turkey are required to go to school for 12 years.

The 1999 İzmit earthquake was an approximately 7.4 magnitude earthquake that struck northwestern Turkey on August 17, 1999, at about 3:02 am local time. 18.000 people died in the earthquake. Many people have been killed by earthquakes in Turkey.

The New York Times estimated that over 570 people died in the Erzincan earthquake of March 13 1992. The earthquake was a 6.8 on the Richter Scale.

All content from Kiddle encyclopedia articles (including the article images and facts) can be freely used under Attribution-ShareAlike license, unless stated otherwise. Cite this article:
Turkey Facts for Kids. Kiddle Encyclopedia.