The Caracal, also called Persian lynx or African lynx, is a wild cat. Caracals are similar to lynxes, but are more related to the Serval. Caracals are the fastest of the small cats. It was first scientifically described by German naturalist Johann Christian Daniel von Schreber in 1776. Three subspecies are recognised since 2017. 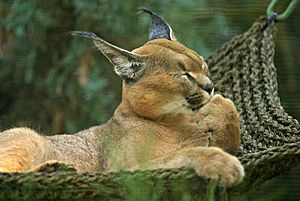 A caracal in the San Diego Zoo

The Caracal is 65 cm in length (about 2 feet), plus 30 cm tail (about 1 foot). It has longer legs and a look very similar to a lynx. The colour of its fur may be wine-red, grey, black, or sand-coloured (a type of yellow). Young caracals have red spots on the fur, but the only markings adults have are black spots above the eyes. A special part of the caracal body are its long black ears - the word "caracal" come from the Turkish word karakulak ("black ear"). Their ears are controlled by 20 different muscles, to help them find the animals they hunt. 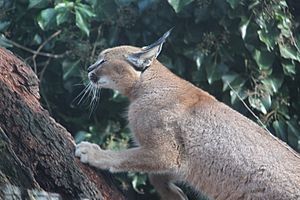 The caracal is typically nocturnal (active at night), though some activity may be observed during the day as well. However, the cat is so secretive and difficult to observe that its activity at daytime might easily go unnoticed. A study in South Africa showed that caracals are most active when air temperature drops below 20 °C (68 °F); activity typically ceases at higher temperatures.

A solitary cat, the caracal mainly occurs alone or in pairs; the only groups seen are of mothers with their offspring. A territorial animal, the caracal marks rocks and vegetation in its territory with urine and probably with dung, which is not covered with soil. Claw scratching is prominent.

In Israel, males are found to have territories averaging 220 km2 (85 sq mi), while that of females averaged 57 km2 (22 sq mi). The conspicuous ear tufts and the facial markings often serve as a method of visual communication; caracals have been observed interacting with each other by moving the head from side to side so that the tufts flicker rapidly. Like other cats, the caracal meows, growls, hisses, spits, and purrs. 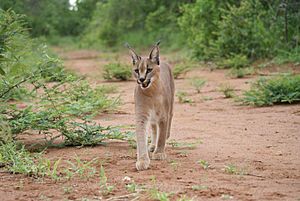 Caracals live in Africa and Western Asia. Their habitat is dry steppes (areas without trees, covered with grass or shrubs) and semi-deserts, but also can live in places similar to woodlands, savannas, and scrub forests. They live alone or with a mate in a territory.

A caracal may live without drinking for a long time - they get the water from the body of the animals they eat. It hunts at night (but in winter they also hunt in the daytime) for rodents, birds, and hares. It is not usual, but sometimes they hunt small antelopes or young ostriches. They prefer to eat only the external meat of the mammals they hunt, and do not eat the internal organs, and they also do not like eating fur. But they eat the feathers of small birds and rotten meat.

They can hunt birds very well; a caracal is able to snatch a bird in flight, sometimes more than one at a time. Caracals can jump and climb every well, which enables them to catch hyraxes better than any other carnivore. 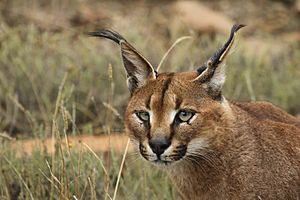 Gestation lasts about two to three months, following which a litter consisting of one to six kittens is born. Births generally peak from October to February. Births take place in dense vegetation or deserted burrows of aardvarks and porcupines. Kittens are born with their eyes and ears shut and the claws not retractable (unable to be drawn inside); the coat resembles that of adults, but the abdomen is spotted.

Eyes open by ten days, but it takes longer for the vision to become normal. The ears become erect and the claws become retractable by the third or the fourth week. Around the same time, the kittens start roaming their birthplace, and start playing among themselves by the fifth or the sixth week. They begin taking solid food around the same time, they have to wait for nearly three months before they make their first kill.

As the kittens start moving about by themselves, the mother starts shifting them everyday. Juveniles begin dispersing at nine to ten months, though a few females stay back with their mothers. The average lifespan of the caracal in captivity is nearly 16 years. 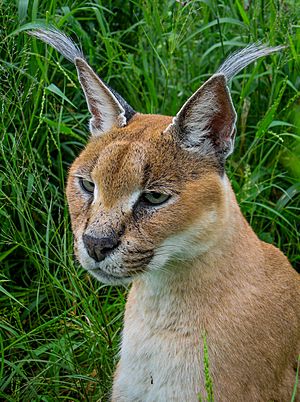 Because they can learn tricks and get accustomed to live with humans, caracals are sometimes kept as pets (especially in the United States and some European countries). Farmers in Africa do not like them, because sometimes they enter in farms and eat chickens and other animals.

It is not easy to see caracals in nature because they hide very well. Drivers in countries where caracals live, for example, Kenya and Botswana, see many animals next to roads, but it is very rare a sighting of a caracal. 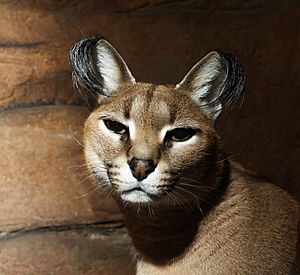 Caracal at the Cincinnati Zoo

Chinese emperors used caracals as gifts. In the 13th and the 14th centuries, Yuan dynasty rulers bought numerous caracals, cheetahs, and tigers from Muslim merchants in the western parts of the empire in return for gold, silver, cash, and silk.

In those times, caracals were exposed to a flock of pigeons and people would bet on which caracal would kill the largest number of pigeons. This probably gave rise to the expression "to put the cat among the pigeons".

The caracal appears to have been religiously significant in the Egyptian culture, as it occurs in paintings and as bronze figurines; sculptures were believed to guard the tombs of pharaohs. Embalmed caracals have also been discovered. Its pelt was used for making fur coats.

All content from Kiddle encyclopedia articles (including the article images and facts) can be freely used under Attribution-ShareAlike license, unless stated otherwise. Cite this article:
Caracal Facts for Kids. Kiddle Encyclopedia.