This article is about the desert. The article about the country can be found at Western Sahara 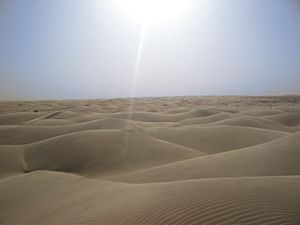 Sand dunes in the Sahara desert

The Sahara in North Africa, is the one of the largest deserts in the world. Antarctica is also a desert, and is larger.

It is bounded by the Atlantic Ocean, the Atlas Mountains, the Mediterranean Sea, the Red Sea, and the Sahel region. Inside it are parts of many countries, including Morocco, Algeria, Tunisia, Libya, Egypt, Mauritania, Mali, Niger, Chad, and The Sudan. Most parts are uninhabited, but some people manage to survive in places where there is water.

The Sahara Desert is about 9,065,000 square kilometers in size. It has been both larger and smaller at different times. After the last ice age it became more fertile, then dried up again. It is the hottest place on the Earth, but not the driest. The driest is the Atacama Desert in South America. The Sahara has about the same size as the whole United States. 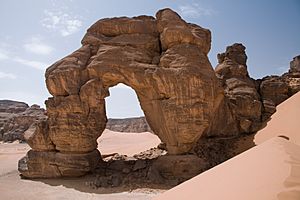 The highest mountain is 3415 m, and is the Emi Koussi in Chad. Some mountain peaks in the Sahara Desert have snow even in the summer. The main mountain ranges is the Atlas Mountains in Algeria. The Sahara's lowest point lies in the Qattara Depression in Egypt, at about 130 metres below sea level. Sand sheets and dunes are about 25% of the Sahara. All the other parts are mountains, steppes with a lot of stones, and oases.

There are several rivers running through the Sahara. However, most of them come and go through the seasons, except for the Nile River and Niger River.

Metallic minerals are very important to most Saharan countries. Algeria and Mauritania have several major deposits of iron ore. There are also bits of uranium, while Niger has the largest parts of them. A lot of phosphates are in Morocco and Western Sahara. Oil is mainly found in Algeria. The oil is very important to the economy of the entire country. While the mineral exploitation has led to economic growth in Sahara, this has rarely helped the indigenous population, as skilled workers have been brought from other countries. 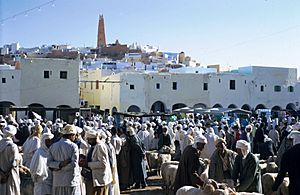 Market on the main square of Ghardaïa (1971)

Of the Sahara's around 4 million people, most live in Mauritania, Western Sahara, Algeria, Libya and Egypt. Dominant groups of people are Sahrawis and Tuareg. The largest city is Nouakchott, Mauritania's capital. Other important cities are Tamanrasset in Algeria, and Sebha and Ghat in Libya.

Only 200,000 km² of the Sahara are fertile oases, where dates, corn, and fruits are grown. The few fertile regions today are fed by underground rivers and underground basins. Many of Sahara's oases rests in depressions (areas under sea level) allowing water to surface from underground reservoirs; artesian wells.

The soil in Sahara is low in organic matter. The soil in depressions is often saline.

Other sorts of vegetation include scattered concentrations of grasses, shrubs and trees in the highlands, as well as in the oases and along river beds. Some plants are well adjusted to the climate, allowing them to germinate within 3 days of rain and sow their seeds within 2 weeks after that.

4,000 years ago, the Sahara would have been a thriving savanna grassland with a great variety of wildlife. This would have included animals such as elephants and giraffes. The climate has changed, causing the rainfall to drop and turn the Sahara into the barren, desert wilderness as we know it today.

All content from Kiddle encyclopedia articles (including the article images and facts) can be freely used under Attribution-ShareAlike license, unless stated otherwise. Cite this article:
Sahara Facts for Kids. Kiddle Encyclopedia.