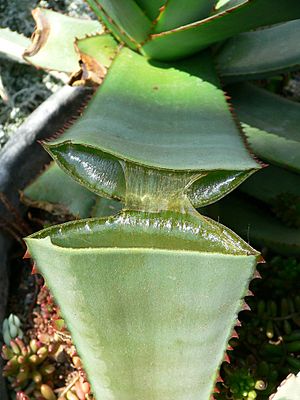 Succulent plants store water in their fleshy stems, or leaves, such as this Aloe

Succulent plants are plants that have adapted to very dry climates. They have adapted in such a way that they can store water, either in their leaves, stems or roots. Very often, they look different than plants that do not do this. Their leaves may look more fleshy. A very good example of succulents are the cacti. Almost all cacti are succulents. Not all succulents are cacti though. Other plant families with this property are the agavaceae (Agave family), Azioaceae and Crassulaceae. Other well-known succulents are the Aloe and the Bottle tree. 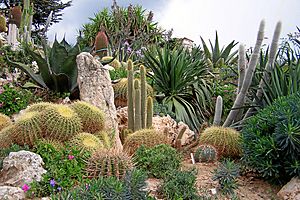 A collection of succulent plants, including cacti, from the Jardin botanique d'Èze, France

The storage of water often gives succulent plants a more swollen or fleshy appearance than other plants, a characteristic known as succulence. In addition to succulence, succulent plants variously have other water-saving features. These may include:

Other than Antarctica, succulents can be found within each continent. While it is often thought that most succulents come from dry areas such as steppes, semi-desert, and desert, the world's driest areas do not make for proper succulent habitats. Australia, the world's driest continent, host very few native succulents due to the frequent and prolonged droughts. Even Africa, the continent with the most native succulents, does not host many of the plants in its most dry regions. However, while succulents are unable to grow in these harshest of conditions, they are able to grow in conditions that are uninhabitable by other plants. In fact, many succulents are able to thrive in dry conditions, and some are able to last up to two years without water depending on their surroundings and adaptations. Succulents may also occasionally occur as epiphytes, growing on other plants with limited or no contact with the ground, and are dependent on their ability to store water and gain nutrients by other means; this niche is seen in Tillandsia. Succulents also occur as inhabitants of sea coasts and dry lakes, which are exposed to high levels of dissolved minerals that are deadly to many other plant species. Potted succulents are able to grow in most indoor environments with minimal care.

All content from Kiddle encyclopedia articles (including the article images and facts) can be freely used under Attribution-ShareAlike license, unless stated otherwise. Cite this article:
Succulent plant Facts for Kids. Kiddle Encyclopedia.