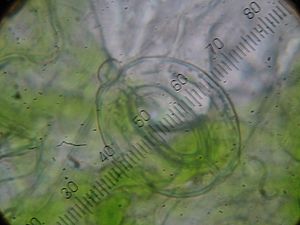 Stoma of a leaf under a microscope 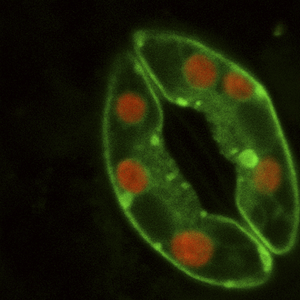 In botany, a stoma (plural = stomata) is a tiny opening or pore. It is found on plant leaves and stems, and any other green parts of the plant. It is used for gas exchange. Stomata are mostly found on the under-surface of plant leaves. Almost all land plants have stomata.

Stomata have two main functions. First is gaseous exchange i.e. intake of carbon dioxide and release of oxygen. The second is the process of transpiration in plants.

The pore is formed by a pair of cells known as guard cells. These adjust the size of the opening by opening or closing. To open a guard cell, protons (hydrogen ions, H+) are pumped into the guard cells. Water enters into them, the cells gets filled, and they open.

All content from Kiddle encyclopedia articles (including the article images and facts) can be freely used under Attribution-ShareAlike license, unless stated otherwise. Cite this article:
Stomata Facts for Kids. Kiddle Encyclopedia.