Stuctural formula of carbon dioxide. C is carbon and O is oxygen. The double lines represent the double chemical bond between the atoms. 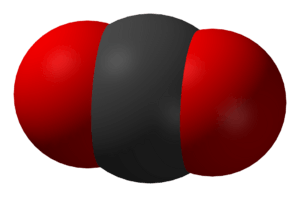 A picture to show simply how the atoms may fill space. The black is carbon and the red is oxygen.

Carbon dioxide (CO2) is a chemical compound. It is a gas at room temperature. It is made of one carbon and two oxygen atoms. People and animals release carbon dioxide when they breathe out. Also, every time something organic is burnt (or a fire is made), it makes carbon dioxide. Plants use carbon dioxide to make food. This process is called photosynthesis. The properties of carbon dioxide were studied by the Scottish scientist Joseph Black in the 1750s.

Carbon dioxide is an end product in organisms that obtain energy from breaking down sugars, fats and amino acids with oxygen as part of their metabolism. This is a process known as cellular respiration. This includes all plants, animals, many fungi and some bacteria. In higher animals, the carbon dioxide travels in the blood from the body's tissues to the lungs where it is breathed out. Plants take in carbon dioxide from the atmosphere to use in photosynthesis.

Dry ice, or solid carbon dioxide, is the solid state of CO2 gas below -109.3 °F (-78.5°C). Dry ice does not occur naturally on earth but is man made. It is colorless. People use dry ice to make things cold, and to make drinks fizzy, kill gophers, and freeze warts. The vapor of dry ice causes suffocation and eventually, death. Caution and professional assistance is recommended whenever dry ice is in use. 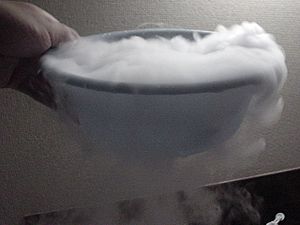 Dry ice when put in water

Carbon dioxide gas that comes off of dry ice is so cold that when it mixes with air it cools the water vapour in the air to fog, which looks like a thick white smoke. It is often used in the theater to create the appearance of fog or smoke.

The carbonic acid (H2CO3) then decomposes to water and CO2. Such reactions cause foaming or bubbling, or both. In industry, such reactions are used many times to neutralize waste acid streams.

Quicklime (CaO), a chemical that has widespread use, can be made heating limestone to about 850 °C. This reaction also makes CO2:

Carbon dioxide is also made in the combustion of all carbon-containing fuels, such as methane (natural gas), petroleum distillates (gasoline, diesel, kerosene, propane), coal or wood. In most cases, water is also released. As an example the chemical reaction between methane and oxygen is:

Carbon dioxide is made in steel mills. Iron is reduced from its oxides with coke in a blast furnace, producing pig iron and carbon dioxide:

All aerobic organisms produce CO2 when they oxidize carbohydrates, fatty acids, and proteins in the mitochondria of cells. The large number of reactions involved are exceedingly complex and not described easily. (They include cellular respiration, anaerobic respiration and photosynthesis). Photoautotrophs (i.e. plants, cyanobacteria) use another reaction: Plants absorb CO2 from the air, and, together with water, react it to form carbohydrates:

Carbon dioxide is soluble in water, in which it spontaneously interconverts between CO2 and H2CO3 (carbonic acid). The relative concentrations of CO2, H2CO3, and the deprotonated forms HCO−
3 (bicarbonate) and CO2−
3(carbonate) depend on the acidity (pH). In neutral or slightly alkaline water (pH > 6.5), the bicarbonate form predominates (>50%) becoming the most prevalent (>95%) at the pH of seawater, while in very alkaline water (pH > 10.4) the predominant (>50%) form is carbonate. The bicarbonate and carbonate forms are very soluble. So, air-equilibrated ocean water (mildly alkaline with typical pH = 8.2–8.5) contains about 120 mg of bicarbonate per liter.

Carbon dioxide can be created with a simple chemical reaction:

All content from Kiddle encyclopedia articles (including the article images and facts) can be freely used under Attribution-ShareAlike license, unless stated otherwise. Cite this article:
Carbon dioxide Facts for Kids. Kiddle Encyclopedia.