Apollo 13 was the seventh mission of NASA's Project Apollo and the third manned lunar-lander mission. The flight was commanded by Jim Lovell. The other astronauts on board were Jack Swigert and Fred Haise.

The craft was launched successfully toward the Moon, but two days after launch a faulty oxygen tank exploded, and the Service Module became damaged, causing a loss of oxygen and electrical power. There was a very large chance that the astronauts would die before they could return to Earth. They were very short of oxygen. Oxygen is not just used to breathe; on the Apollo spacecraft it was used in a device called a Fuel cell to generate electricity. So they conserved their remaining air by turning off almost all their electrical equipment, for example heaters. It became very cold in the spacecraft.

In order to stay alive the astronauts also had to move into the Apollo Lunar Module and make it work as a sort of "lifeboat". 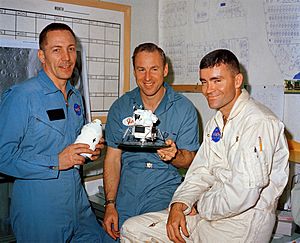 Swigert, Lovell and Haise the day before launch

Apollo 13's mission commander, Jim Lovell, was 42 years old at the time of the spaceflight, which was his fourth and last. He was a graduate of the United States Naval Academy and had been a naval aviator and test pilot before being selected for the second group of astronauts in 1962; he flew with Frank Borman in Gemini 7 in 1965 and Buzz Aldrin in Gemini 12 the following year before flying in Apollo 8 in 1968, the first spacecraft to orbit the Moon. At the time of Apollo 13, Lovell was the NASA astronaut with the most time in space, with 572 hours over the three missions.

Jack Swigert, the command module pilot (CMP), was 38 years old and held a B.S. in mechanical engineering and an M.S. in aerospace science; he had served in the Air Force and in state Air National Guards, and was an engineering test pilot before being selected for the fifth group of astronauts in 1966.

Fred Haise, the lunar module pilot (LMP), was 35 years old. He held a B.S. in aeronautical engineering, had been a Marine Corps fighter pilot, and was a civilian research pilot for NASA when he was selected as a Group 5 astronaut. Apollo 13 was Swigert's and Haise's only spaceflight.

Apollo blasted off on the April 11, 1970 at 19:13 UTC from Cape Canaveral and went into temporary low Earth orbit. Two hours later they fired the rocket motor again to go towards the Moon. They wanted to land at Fra Mauro. Despite the hardships, the crew made it back to Earth. Though the crew did not land on the Moon, the flight became very well known.

Some people regarded it as a failure because they did not land on the Moon. However, others thought it was possibly the National Aeronautics and Space Administrations' (NASA's) greatest accomplishment in returning three men in a very damaged spacecraft back to Earth safely.

Coming up to re-entry, it was thought that the electrical equipment would short circuit because the water in the astronauts' breath had turned back into a liquid all over the computers. However, the electronics were fine.

Books were written about the event, for example one by Jim Lovell, the commander of the mission. A movie was also made about it, directed by Ron Howard and starring Tom Hanks.

All content from Kiddle encyclopedia articles (including the article images and facts) can be freely used under Attribution-ShareAlike license, unless stated otherwise. Cite this article:
Apollo 13 Facts for Kids. Kiddle Encyclopedia.