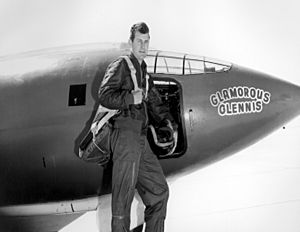 Chuck Yeager was the first pilot to fly faster than the speed of sound.

Test pilots may work for the military or for a company. Flying military aircraft in order to test them is the most difficult and dangerous kind of flying other than flying in war.

In the 1950s, one test pilot died in an accident every week or so, but many fewer die today. This is because aircraft technology has been improved and because more testing is done on the ground rather than in the air. Also, unmanned aerial vehicles are now often used for testing. Still, the job of test pilot is more dangerous than other jobs for pilots.

A test pilot must be able to:

Test pilots must know about aerospace engineering in order to know how and why planes are tested. They must be more skilled than most other pilots.

Some famous test pilots include:

All content from Kiddle encyclopedia articles (including the article images and facts) can be freely used under Attribution-ShareAlike license, unless stated otherwise. Cite this article:
Test pilot Facts for Kids. Kiddle Encyclopedia.