A 1968 graduate of the United States Naval Academy, he became a Marine Aviator and test pilot. After his service as an astronaut, he became Deputy Commandant of Midshipmen at the Naval Academy.

On May 23, 2009, President Barack Obama announced the nomination of Bolden as NASA Administrator and Lori Garver as Deputy NASA Administrator. Bolden was confirmed by the Senate on July 15, 2009. He is the first African American to head the agency on a permanent basis.

On Jan 12, 2017, Bolden announced his resignation from NASA during a town hall meeting at NASA Headquarters in Washington D.C. His last day would be January 19, and Robert M. Lightfoot Jr. was announced as acting NASA Administrator.

Selected by NASA in May 1980, Bolden became an astronaut in August 1981. His technical assignments included: Astronaut Office Safety Officer; Technical Assistant to the Director of Flight Crew Operations; Special Assistant to the Director of the Johnson Space Center; Astronaut Office Liaison to the Safety, Reliability and Quality Assurance Directorates of the Marshall Space Flight Center and the Kennedy Space Center; Chief of the Safety Division at JSC; Lead Astronaut for Vehicle Test and Checkout at the Kennedy Space Center; and Assistant Deputy Administrator, NASA Headquarters.

Bolden was the first person to ride the Launch Complex 39 slidewire baskets which enable rapid escape from a Space Shuttle on the launch pad. The need for a human test was determined following a launch abort on STS-41-D where controllers were afraid to order the crew to use the untested escape system.

A few years before his appointment by President Barack Obama to be administrator of NASA, Bolden auditioned, along with professional actors, for the role of virtual host for NASA's "Shuttle Launch Experience" educational attraction at the Kennedy Space Center Visitor Complex in Merritt Island, Florida.

On Jan 12, 2017, Bolden announced his resignation from NASA during a Town Hall meeting at NASA Headquarters in Washington D.C. His last day would be January 19, and Robert M. Lightfoot Jr. was announced as acting NASA Administrator. 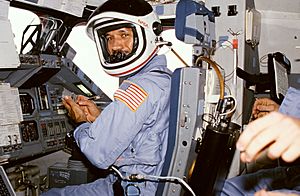 Bolden on the flight deck of Columbia during STS-61-C

On STS-61-C, Bolden piloted Space Shuttle Columbia. During the six-day flight, crew members deployed the SATCOM Ku band satellite, and conducted experiments in astrophysics and materials processing. The mission launched from Kennedy Space Center on January 12, 1986, orbited the Earth 96 times, and ended with a successful night landing at Edwards Air Force Base, California on January 18, 1986.

Bolden piloted Space Shuttle Discovery during STS-31. Launched on April 24, 1990 from Kennedy Space Center, the crew spent the five-day mission deploying the Hubble Space Telescope and conducting a variety of middeck experiments. They also used a variety of cameras, including both the IMAX in cabin and cargo bay cameras, for Earth observations from their record-setting altitude of over 400 miles. Following 75 orbits of Earth in 121 hours, Discovery landed at Edwards Air Force Base on April 29, 1990.

On STS-45, Bolden commanded a crew of seven aboard Space Shuttle Atlantis, launched on March 24, 1992 from Kennedy Space Center. STS-45 was the first Spacelab mission dedicated to NASA's "Mission to Planet Earth". During the nine-day mission, the crew operated the twelve experiments that constituted the ATLAS-1 (Atmospheric Laboratory for Applications and Science) cargo. ATLAS-1 obtained detailed measurements of atmospheric chemical and physical properties. In addition, this was the first time an artificial beam of electrons was used to stimulate an auroral discharge. Following 143 orbits of Earth, Atlantis landed at Kennedy Space Center on April 2, 1992. 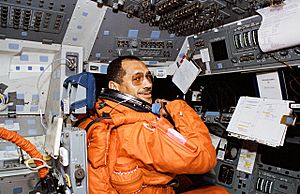 Bolden on the flight deck of Discovery during STS-60

Bolden commanded STS-60's crew of six aboard Discovery. This was the historic first joint-American/Russian Space Shuttle mission involving the participation of a Russian cosmonaut, Sergei Krikalev, as a Mission Specialist. The flight launched on February 3, 1994 from Kennedy Space Center, and carried the Space Habitation Module-2 (SPACEHAB), and the Wake Shield Facility. The crew conducted a series of joint American/Russian science activities. The mission achieved 130 orbits of the Earth, ending with a landing on February 11, 1994, at the Kennedy Space Center. 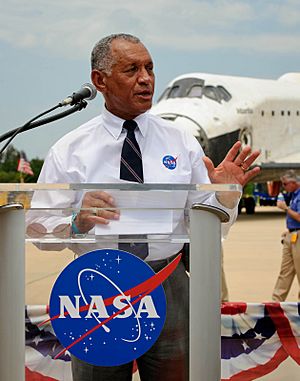 In 2009, President Obama appointed Bolden to be administrator of NASA.

That same day, at a question and answer session with employees at the Johnson Space Center, Bolden compared the Constellation Program to a stillborn baby calf extracted from a camel's womb by U.S. Marines, saying "We do the same thing. We’ve got some stillborn calves around, and we have got to figure out ways to help each other bring them back to life."

In a June 2010 interview with Al Jazeera, Bolden said that the top three goals he was tasked with by President Obama were to help re-inspire children to want to get into science and math, to expand NASA's international relationships, and, "perhaps foremost", "to reach out to the Muslim world... to help them feel good about their historic contribution to science... and math and engineering".

Bolden said his agency's long-term ambition is landing astronauts on Mars. He has cited spending cuts as a concern for major NASA projects.

On August 28, 2012, he was the first human being to have his voice broadcast on the surface of Mars. Although the rover has no speakers, it received the transmission of his voice and then beamed it back to Earth.

In 2013 he noted the National Aerospace Week as NASA administrator.

On October 28, 2015, Bolden presented the next steps for a human journey to Mars at the Center for American Progress in Washington, D.C..

All content from Kiddle encyclopedia articles (including the article images and facts) can be freely used under Attribution-ShareAlike license, unless stated otherwise. Cite this article:
Charles Bolden Facts for Kids. Kiddle Encyclopedia.