The Vietnam War (also known as Second Indochina War or American War in Vietnam) lasted from 1 November 1955–30 April 1975, (19 years, 5 months, 4 weeks and 1 day). It was fought between North Vietnam and South Vietnam. North Vietnam was supported by the Soviet Union, China and North Korea, while South Vietnam was supported by the United States, South Korea, Thailand, Australia, New Zealand, and the Philippines. People from other countries also went to fight but not in their own national army. This conflict between communist and capitalist countries was part of the Cold War.

The Viet Cong (also known as the National Liberation Front, or NLF), was a South Vietnamese communist force helped by the North. It fought a guerrilla war against the anti-communist forces in the South. The People's Army of Vietnam (also known as the North Vietnamese Army) engaged in a more conventional war, at times putting large forces to battle.

Viet Minh wave their flag over a captured French bunker at Dien Bien Phu in 1954. The French defeat at the Battle of Ðiện Biên Phủ led to the Geneva Conference and the partition of Vietnam into north and south.

Map of a partitioned Vietnam, 1964. Communist-controlled North Vietnam is in red; most of the ground-fighting was in the South.

France began to colonize Vietnam between 1859 and 1862, when they took control of Saigon. By 1864 they controlled all of Cochinchina, the southern part of Vietnam. France took control of Annam, the large central part of Vietnam, in 1874. After France defeated China in the Sino-French war (1884–1885), they took over Tonkin, the northern part of Vietnam. French Indochina was formed in October 1887 from these three areas of Vietnam (Cochinchina, Annam and Tonkin), as well as the Kingdom of Cambodia. Laos was added after a war with Thailand, the Franco-Siamese War, in 1893.

After the defeat of Nazi Germany, the Vichy government was no longer in control of France or its territories. The newly formed Provisional Government of the French Republic attempted to take back control of its former colonies in Indochina by force if necessary. But the French efforts at regaining their colony in Vietnam were opposed by a Vietnamese army called the Viet Minh. 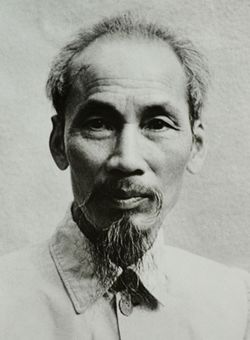 The Viet Minh had been founded in 1941 by the communist party and was led by Hồ Chí Minh. This led to the First Indochina War between France and the Viet Minh. The fighting started with the French bombardment of Haiphong Harbor in November 1946 and ended with a triumph of the Viet Minh at Dien Bien Phu.

In July 1954, France and the Viet Minh signed the Geneva Peace Accord. This resulted in dividing Vietnam along the 17th parallel into a northern section, under the control of the communists led by Ho Chi Minh as president, and a southern section led by the Catholic anti-communist Ngo Dinh Diem. The partition was to be temporary until elections in 1956. However, Diem started arresting suspected communist sympathizers in 1956 to keep power for himself. The elections were never held, and in 1957 the north Vietnamese began guerrilla warfare against the south. 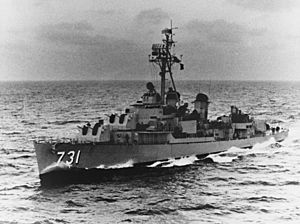 After the alleged second attack the U.S. launched air strikes against North Vietnam. The Congress passed the Gulf of Tonkin Joint Resolution (H.J. RES 1145) on 7 August 1964. This gave the president the power to run large-scale military operations in Southeast Asia without declaring war. There was little to no proof of these attacks and it was believed by some that they were an excuse for expanded U.S. involvement in Indochina.

The North Vietnamese and Viet Cong were supplied by a vast network of hidden trails, known as the Ho Chi Minh Trail. Which was hidden very well and many attempts were made by the U.S. to bomb and destroy it. Supplies and soldiers from North Vietnam were sent through Laos to communists forces in South Vietnam. American planes heavily bombed the Ho Chi Minh Trail; 3,000,000 short tons (2,700,000 t) of bombs were dropped on Laos. It slowed down but did not stop the trail system.

Severe communist losses during the 1968 Tet Offensive, made it possible for the U.S. to withdraw many soldiers. As part of a policy called "Vietnamization", South Vietnamese troops were trained and equipped to replace the Americans who left. By 1973, 95 percent of the American troops were gone.

A peace treaty was signed in Paris in January 1973 by all the parties, but fighting continued until 1975. 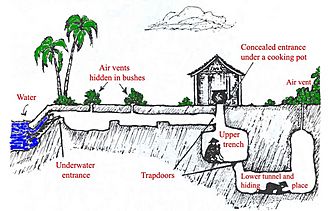 Cross-sectional diagram showing an example of a section of tunnel system used by the Vietcong during the Vietnam War.

The area with the most tunnels was called the Iron Triangle by the Americans. The Viet Minh and later their successors the Vietcong used these tunnels.

A Vietcong soldier wearing typical clothing and sandals in a tunnel.

They often ate and slept in these tunnels and would disappear into them when the Americans raided a village.

In guerilla warfare, small units fight limited battles against an enemy force, set up ambushes, make surprise attacks, and then retreat back into the countryside or blend into the local population. It also includes making it difficult for the enemy to operate by engaging in sabotage and harassing the enemy with lethal means such as land mines and booby traps. The communist troops more often engaged in guerilla warfare against the South Vietnamese and American troops.

Although most traps were non-explosive, there were a few explosive traps which all used grenades. A trip wire was placed and if a soldier tripped over the wire, a grenade pin was pulled out and the grenade would blow, killing the soldier. 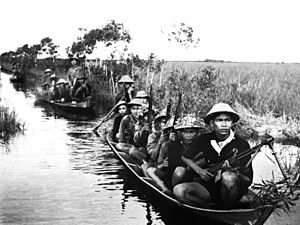 Another style of trap was nicknamed “Venus Flytrap”. It had about eight barbs attached to a rectangular frame sitting on a small hole. The barbs were facing down so when the soldier’s leg got caught in it, it wouldn’t hurt until he pulled his leg out. When he pulled his leg out the barbs would rip through his leg.

Another Vietcong trap was the Punji trap. Two wooden platforms were placed and covered with leaves to camouflage it. There were spikes on the inside of the wood. When a soldier came along and walked on the wood, it caved in and the spikes would go through the soldier’s foot. These traps were the most common because they were the cheapest and very effective. They also were often contaminated so that the soldier would also become infected.

Besides hurting or killing people, these traps were good at causing fear and lowering soldier morale. 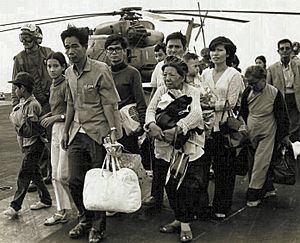 Vietmanese refugees fleeing from communist forces, on an American aircraft carrier off the coast of Vietnam on April 29, 1975, the day before the complete fall of Saigon

The Fall of Saigon was the capture of Saigon, the capital of South Vietnam, by the People's Army of Vietnam and the National Liberation Front on April 30, 1975. This marked the end of the Vietnam War and the beginning of the formal reunification of Vietnam into a communist state.

Before the city fell the few American civilian and military personnel left Vietnam, along with tens of thousands of South Vietnamese soldiers and civilians had fled.

North Vietnamese forces under the command of General Văn Tiến Dũng began their final attack on Saigon, which was commanded by General Nguyen Van Toan on April 29, with a heavy artillery bombardment of Tân Sơn Nhứt Airport which killed the last two American servicemen who died in Vietnam, Charles McMahon and Darwin Judge.

By the afternoon of the next day, North Vietnamese troops had occupied the important points within the city and raised their flag over the South Vietnamese presidential palace. The government of South Vietnam formally gave up shortly after.

Any Americans that were in Saigon at the time were evacuated by helicopter or fixed-wing aircraft. The surrender of Saigon was told by the South Vietnamese president himself, General Duong Van Minh. He said "We are here to hand over to you the power in order to avoid bloodshed." General Minh had become South Vietnam’s president for two days as the country crumbled.

All content from Kiddle encyclopedia articles (including the article images and facts) can be freely used under Attribution-ShareAlike license, unless stated otherwise. Cite this article:
Vietnam War Facts for Kids. Kiddle Encyclopedia.