'Hồ Chí Minh', meaning 'Hồ with the will of light', was not his real name. He took this name around the time of the August Revolution in 1945. His name was Nguyễn Sinh Cung when he was born. At age ten, he changed his name to Nguyễn Tất Thành, according to Confucian tradition. He would later use many 'pseudonyms' (false names). Other than 'Hồ Chí Minh', his most famous name was probably Nguyễn Ái Quốc meaning 'Nguyễn (by far the most common Vietnamese last name) who loves his country'. Vietnamese people commonly refer to him as Bác Hồ (Uncle Hồ).

Nguyễn studied in Paris from 1919-23. In those four years, he started following communism, and began to believe that Vietnam- then a French colony-should be independent. During this time he wrote a letter, which was ignored, to United States President Woodrow Wilson, asking for U.S. military aid to help overthrow the French colonial rulers. He joined the French Communist Party, and started visiting Moscow regularly, as a member of the Asian branch of the Comintern. 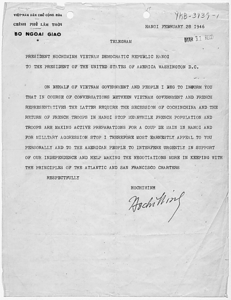 Vietnam War (with the United States)

When South Vietnam and America did not keep their promise to hold an election and unite the two halves into one country, Hồ led Vietnam into a military and political struggle to bring the rice fields of the South under his Communist rule. Two decades of war followed, killing millions of Vietnamese. The United States supported South Vietnam with military aid, while the Soviet Union (led by Nikita Krushchev and then Leonid Brezhnev) and People's Republic of China (led by Mao Zedong) continued to support North Vietnam's war effort.

Suffering from diabetes and heart problems, Hồ Chí Minh died on the morning of September 2, 1969, of a heart attack.

In his will he said he wished to be cremated and have his ashes be buried in hills in the north, center, and south of Vietnam. After he died however, his followers embalmed his body and put it in a tomb, the mausoleum, where he is still worshipped today.

In 1976, in the style of the Soviet Union, the victorious Communist North renamed the capital of the non-Communist South, Saigon, to Ho Chi Minh City, in honour of their leader.

All content from Kiddle encyclopedia articles (including the article images and facts) can be freely used under Attribution-ShareAlike license, unless stated otherwise. Cite this article:
Ho Chi Minh Facts for Kids. Kiddle Encyclopedia.