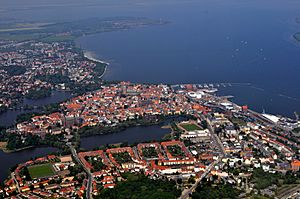 Stralsund is a city in Mecklenburg-Vorpommern, Germany, situated at the southern coast of the Strelasund (a sound of the Baltic Sea separating the island of Rügen from the mainland).

In 1293 Stralsund became a member of the Hanseatic League.

From 1949 until German Reunification in 1990, Stralsund was part of the German Democratic Republic.

All content from Kiddle encyclopedia articles (including the article images and facts) can be freely used under Attribution-ShareAlike license, unless stated otherwise. Cite this article:
Stralsund Facts for Kids. Kiddle Encyclopedia.