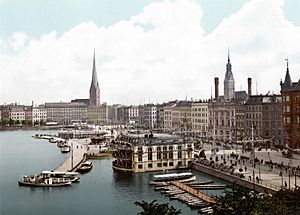 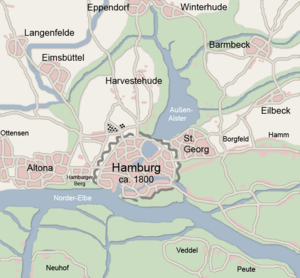 Hamburg or in full Free and Hanseatic City of Hamburg (German: Freie und Hansestadt Hamburg), is a city in the north of Germany on the banks of the River Elbe, 18 km away from the North Sea.

Since it was an important member of the Hanseatic League, the city's official name still includes Hansestadt (Hanseatic city). Other German cities that do the same today are: Lübeck, Rostock, Wismar, Stralsund, Bremen, Greifswald and Demmin. The membership in this trade alliance has influenced the architecture of the city to a great extent. It has also left some marks in the region around the city. The city is ranked 17th for best place to live in the world.

Hamburg is at a sheltered natural harbour on the southern fanning-out of the Jutland Peninsula, between Continental Europe to the south and Scandinavia to the north, with the North Sea to the west and the Baltic Sea to the northeast. It is on the River Elbe at its confluence with the Alster and Bille. The city centre is around the Binnenalster ("Inner Alster") and Außenalster ("Outer Alster"), both formed by damming the River Alster to create lakes. The islands of Neuwerk, Scharhörn, and Nigehörn, 100 kilometres (60 mi) away in the Hamburg Wadden Sea National Park, are also part of the city of Hamburg.

Hamburg has an oceanic climate (Cfb), influenced by its proximity to the coast and marine air masses that originate over the Atlantic Ocean. Nearby wetlands also enjoy a maritime temperate climate. The amount of snowfall has differed a lot during the past decades: while in the late 1970s and early 1980s, at times heavy snowfall occurred, the winters of recent years have been less cold, with snowfall only on a few days per year. 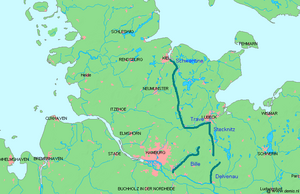 The Limes Saxoniae border between the Saxons and the Slavic Obotrites, established about 810. 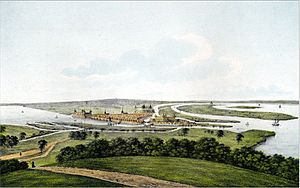 The name Hamburg comes from the first permanent building on the site, a castle which the Emperor Charlemagne ordered constructed in AD 808. It rose on rocky terrain in a marsh between the River Alster and the River Elbe as a defence against Slavic incursion, and acquired the name Hammaburg, burg meaning castle or fort. The origin of the Hamma term remains uncertain, as does the exact location of the castle.

In 834, Hamburg was designated as the seat of a bishopric. The first bishop, Ansgar, became known as the Apostle of the North. Two years later, Hamburg was united with Bremen as the Bishopric of Hamburg-Bremen.

Hamburg was destroyed and occupied several times. In 845, 600 Viking ships sailed up the River Elbe and destroyed Hamburg, at that time a town of around 500 inhabitants. In 1030, King Mieszko II Lambert of Poland burned down the city. Valdemar II of Denmark raided and occupied Hamburg in 1201 and in 1214. The Black Death killed at least 60% of the population in 1350. Hamburg experienced several great fires in the medieval period. 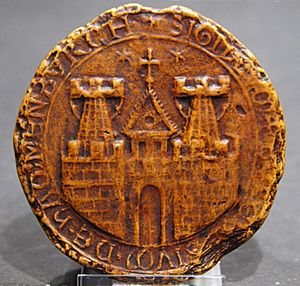 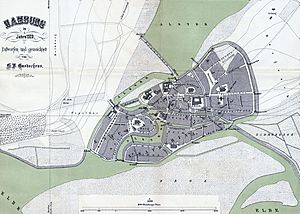 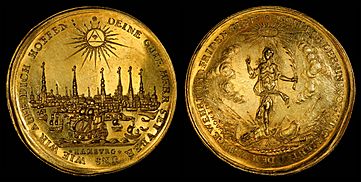 Hamburg depicted on a 1679 Half-portugalöser (5 ducats) 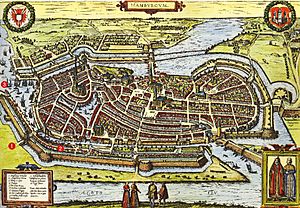 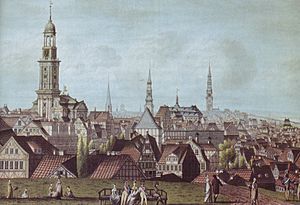 In 1189, by imperial charter, Frederick I "Barbarossa" granted Hamburg the status of an Imperial Free City and tax-free access (or free-trade zone) up the Lower Elbe into the North Sea. In 1265, an allegedly forged letter was presented to or by the Rath of Hamburg. This charter, along with Hamburg's proximity to the main trade routes of the North Sea and Baltic Sea, quickly made it a major port in Northern Europe. Its trade alliance with Lübeck in 1241 marks the origin and core of the powerful Hanseatic League of trading cities. On 8 November 1266, a contract between Henry III and Hamburg's traders allowed them to establish a hanse in London. This was the first time in history that the word hanse was used for the trading guild of the Hanseatic League. In 1270, the solicitor of the senate of Hamburg, Jordan von Boitzenburg, wrote the first description of civil, criminal and procedural law for a city in Germany in the German language, the Ordeelbook (Ordeel: sentence). On 10 August 1410, civil unrest forced a compromise (German: Rezeß, literally meaning: withdrawal). This is considered the first constitution of Hamburg. In 1529, the city embraced Lutheranism, and it received Reformed refugees from the Netherlands and France.

When Jan van Valckenborgh introduced a second layer to the fortifications to protect against the Thirty Years War in the seventeenth century, he extended Hamburg and created a "New Town" (Neustadt) whose street names still date from the grid system of roads he introduced.

Upon the dissolution of the Holy Roman Empire in 1806, the Free Imperial City of Hamburg was not incorporated into a larger administrative area while retaining special privileges (mediatised), but became a sovereign state with the official title of the Free and Hanseatic City of Hamburg. Hamburg was briefly annexed by Napoleon I to the First French Empire (1804–1814/1815). Russian forces under General Bennigsen finally freed the city in 1814. Hamburg re-assumed its pre-1811 status as a city-state in 1814. The Vienna Congress of 1815 confirmed Hamburg's independence and it became one of 39 sovereign states of the German Confederation (1815–1866).

In 1842, about a quarter of the inner city was destroyed in the "Great Fire". The fire started on the night of 4 May and was not extinguished until 8 May. It destroyed three churches, the town hall, and many other buildings, killing 51 people and leaving an estimated 20,000 homeless. Reconstruction took more than 40 years.

After periodic political unrest, particularly in 1848, Hamburg adopted in 1860 a democratic constitution that provided for the election of the Senate, the governing body of the city-state, by adult taxpaying males. Other innovations included the separation of powers, the separation of Church and State, freedom of the press, of assembly and association. Hamburg became a member of the North German Confederation (1866–1871) and of the German Empire (1871–1918), and maintained its self-ruling status during the Weimar Republic (1919–1933). Hamburg acceded to the German Customs Union or Zollverein in 1888, the last (along with Bremen) of the German states to join. The city experienced its fastest growth during the second half of the 19th century, when its population more than quadrupled to 800,000 as the growth of the city's Atlantic trade helped make it Europe's second-largest port. The Hamburg-America Line, with Albert Ballin as its director, became the world's largest transatlantic shipping company around the start of the 20th century. Shipping companies sailing to South America, Africa, India and East Asia were based in the city. Hamburg was the departure port for many Germans and Eastern Europeans to emigrate to the United States in the late 19th and early 20th centuries. Trading communities from all over the world established themselves there.

A major outbreak of cholera in 1892 was badly handled by the city government, which retained an unusual degree of independence for a German city. About 8,600 died in the largest German epidemic of the late 19th century, and the last major cholera epidemic in a major city of the Western world. 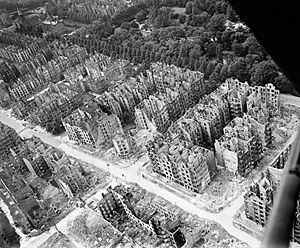 Hamburg after the 1943 bombing 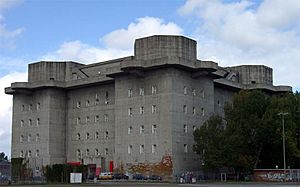 In the Third Reich (1933–1945), Hamburg was a Gau from 1934 until 1945. During the Second World War, Hamburg suffered a series of Allied air raids which devastated much of the city and the harbour. On 23 July 1943, Royal Air Force (RAF) firebombing created a firestorm which spread from the Hauptbahnhof (main railway station) and quickly moved south-east, completely destroying entire boroughs such as Hammerbrook, Billbrook and Hamm South. Thousands of people perished in these densely populated working class boroughs. While some of the boroughs destroyed were rebuilt as residential districts after the war, others such as Hammerbrook were entirely developed into office, retail and limited residential or industrial districts. The raids, codenamed Operation Gomorrah by the RAF, killed at least 42,600 civilians; the precise number is not known. About one million civilians were evacuated in the aftermath of the raids.

The Hamburg Commonwealth War Graves Commission Cemetery is in the greater Ohlsdorf Cemetery in the north of Hamburg.

At least 42,900 people are thought to have perished in the Neuengamme concentration camp (about 25 km (16 mi) outside the city in the marshlands), mostly from epidemics and in the bombing of Kriegsmarine evacuation vessels by the RAF at the end of the war.

Hamburg had the greatest concentration of Jews in Germany. Systematic deportations of Jewish Germans and Gentile Germans of Jewish descent started on 18 October 1941. These were all directed to Ghettos in Nazi-occupied Europe or to concentration camps. Most deported persons perished in the Holocaust. By the end of 1942 the Jüdischer Religionsverband in Hamburg was dissolved as an independent legal entity and its remaining assets and staff were assumed by the Reichsvereinigung der Juden in Deutschland (District Northwest). On 10 June 1943 the Reichssicherheitshauptamt dissolved the Reichsvereinigung by a decree. The few remaining employees not somewhat protected by a mixed marriage were deported from Hamburg on 23 June to Theresienstadt, where most of them perished.

Hamburg surrendered without a fight to British Forces on 3 May 1945. After the Second World War, Hamburg formed part of the British Zone of Occupation; it became a state of the then Federal Republic of Germany in 1949.

From 1960 to 1962, the Beatles launched their career by playing in various music clubs in the city.

On 16 February 1962, a North Sea flood caused the Elbe to rise to an all-time high, inundating one-fifth of Hamburg and killing more than 300 people.

The Inner German border – only 50 kilometres (30 mi) east of Hamburg – separated the city from most of its hinterland and reduced Hamburg's global trade. Since German reunification in 1990, and the accession of several Central European and Baltic states into the European Union in 2004, the Port of Hamburg has restarted ambitions for regaining its position as the region's largest deep-sea port for container shipping and its major commercial and trading centre.

Hamburg's harbour is, by shipments, the second largest harbour in Europe (after Rotterdam) and among the ten largest in the world. It is a very important gate to the countries along the Baltic Sea and Eastern Europe.

There are about 120,000 businesses in Hamburg. The company Airbus has an assembly plant for large civil aircraft in Hamburg. 30,000 people are employed in Hamburg's aircraft industries. There are only two other locations worldwide in this scale, Seattle in the United States and Toulouse in France.

About half of Germany's nation-wide newspapers and magazines are made in Hamburg. Germany's most-viewed television news Tagesschau is broadcast from Hamburg.

All content from Kiddle encyclopedia articles (including the article images and facts) can be freely used under Attribution-ShareAlike license, unless stated otherwise. Cite this article:
Hamburg Facts for Kids. Kiddle Encyclopedia.