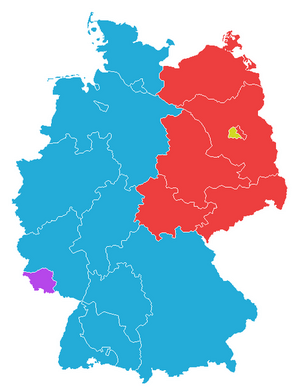 The division of Germany, 1949. West Germany (blue) consists of the American, British and French Zones (without the Saar), East Germany (red) is formed from the Soviet Zone

After the Second World War, Germany had been divided into two countries. One was the Federal Republic of Germany (FRG), also called "West Germany". The other part was the German Democratic Republic (GDR), which was also called "East Germany". The German reunification was on 3 October 1990, when the East German states became a part of the Federal Republic of Germany.

After World War II, The winners made four Allied Occupation Zones in Germany. In 1949 the French, British and American zones were joined into the Federal Republic of Germany, also known as "West Germany", while the Soviet zone was made into a separate state known as the German Democratic Republic, or "East Germany".

During the Cold War, West Germany was a democratic country (Politicians were elected in free elections), was allied with the United States of America and had a capitalist economic system (Businesses were owned by citizens). East Germany was a communist country, a one-party state. The communist party ruled all the time, elections were only for show, and all businesses were owned by the state. Like other states in the Soviet bloc, it was controlled by the Soviet Union.

In 1989, Soviet leader Mikhail Gorbachev started to open the Soviet Union to the west. Many of the communist countries followed his example. East Germany tried to ignore this trend, but during 1989, public protest grew inside the country. After some efforts to keep the country stable, the border was finally opened on 9 November 1989. Conversion of East Germany into a democratic country started almost immediately. During the following 11 months, the terms of unification were negotiated between East and West Germany, France, Great Britain, The United States of America and The Soviet Union, and the Treaty on the Final Settlement with Respect to Germany also called the Two Plus Four Treaty, signed by the two German states and the four wartime allies, opened the way towards reunification.

Two options for reunification were written in the West German constitution (the Grundgesetz):

The second option was chosen, and on 3 October 1990, at 00:01 the five new federal states of Brandenburg, Mecklenburg-Vorpommern, Saxony, Saxony-Anhalt, Thuringia and reunified Berlin officially joined the Federal Republic of Germany. The German Democratic Republic ceased to exist at this moment.

All content from Kiddle encyclopedia articles (including the article images and facts) can be freely used under Attribution-ShareAlike license, unless stated otherwise. Cite this article:
German reunification Facts for Kids. Kiddle Encyclopedia.