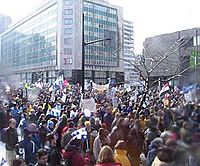 A protest in Montreal.

A protest is when a lot of people come together to show others that they strongly like or are against an idea or event. For example, some people protest racism or war.

There are many ways in which people can protest. Protesters can do things like write a letter, not eat food, sing songs, or even use violence.

All content from Kiddle encyclopedia articles (including the article images and facts) can be freely used under Attribution-ShareAlike license, unless stated otherwise. Cite this article:
Protest Facts for Kids. Kiddle Encyclopedia.