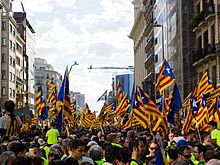 Pro-independence supporters in Barcelona on 11 September 2017.

The Government of Spain opposes Catalan independence. However, the Catalan government says it has the right to independence. Catalonia has not gotten any international support.

All content from Kiddle encyclopedia articles (including the article images and facts) can be freely used under Attribution-ShareAlike license, unless stated otherwise. Cite this article:
2017 Catalan independence referendum Facts for Kids. Kiddle Encyclopedia.