Jakarta is the capital and largest city of Indonesia. Located on the northwest coast of the world's most populous island of Java, Jakarta is the centre of economics, culture and politics of Indonesia, with a population of 10,075,310 as of 2014[update].

Greater Jakarta metropolitan area, is the second largest urban agglomeration and 2nd largest city area in the world after Tokyo, with a population of 30,214,303 inhabitants as of 2010[update] census. Jakarta's business opportunities, as well as its potential to offer a higher standard of living, attract migrants from all over the Indonesian archipelago, making it a melting pot of many communities and cultures.

Jakarta is officially a province with special capital region status, yet is commonly referred to as a city. The Jakarta provincial government administers five administrative cities and one administrative regency. 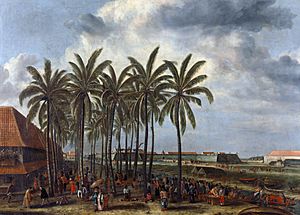 Dutch Batavia built in what is now Jakarta, by Andries Beeckman c. 1656

Jakarta's first name was Sunda Kelapa. Before the Dutch came, it was renamed the city Jayakarta, starting in 1527. In 1619 the Dutch renamed the city Batavia. It was called Jakarta by the Japanese during World War 2. Its current name derives from the word Jayakarta. The origins of this word can be traced to the Old Javanese and ultimately to the Sanskrit language; जय jaya (victorious) and कृत krta (accomplished, acquired), thus "Jayakarta" translates as "victorious deed", "complete act", or "complete victory". Jakarta is nicknamed the Big Durian, the thorny strongly-odored fruit native to the region, as the city is seen as the Indonesian equivalent of the US city of New York (the Big Apple).

Major challenges for Jakarta among others are rapid urban growth that led to overpopulation and ecological breakdown, gridlock traffic and congestion, poverty and inequality, and flooding. The Indonesian capital is sinking up to 17 cm (6.7 inches) per year, which, coupled with the rising of sea level, has made the city prone to flooding. To help cope with the threat from the sea, the Netherlands will give $4 million for a feasibility study to build a dike around Jakarta Bay.

As the economic and political capital of Indonesia with so many different languages and ethnic groups, it is difficult to describe or define a common culture for Jakarta, as the city attracts many native immigrants, from the vast and diverse Indonesian archipelago, who also bring their various languages, dialects, foods and customs. This diversity of origins and languages leads to differences in regard to religion, traditions and linguistics. However ethnic Betawi are considered as the indigenous people of Jakarta. 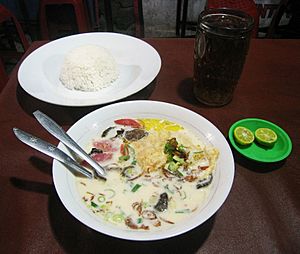 One of the most popular local dishes of Betwai cuisine is Soto Betawi which is prepared from chunks of beef and offal in rich and spicy cow's milk or coconut milk broth.

Jakarta has a vast range of food available at hundreds of eating venues and food courts located all over the city, from modest street-side warung foodstalls and kaki lima (five legs) travelling vendors to high-end fine dining restaurants. From rooftop bar to glamorous lounge, Jakarta has plenty of bars, cafes and clubs.

All content from Kiddle encyclopedia articles (including the article images and facts) can be freely used under Attribution-ShareAlike license, unless stated otherwise. Cite this article:
Jakarta Facts for Kids. Kiddle Encyclopedia.