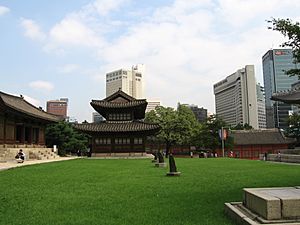 Old and new buildings in the downtown of Seoul

Seoul is the biggest city of the Republic of Korea (South Korea), and its capital. Its official name is Seoul Special City.

It has a population of 10 million which is about 1/5 of the Korean population and 1/7 of Korea peninsula, and covers an area of 610 km² that is only 0.6% of South Korea. It is the 6th most populated city in the world, and 7th most crowded. Seoul is the center of politics, economy, culture, transportation, and education for South Korea.

Seoul is in the middle of the Korean Peninsula. Han River is a major river in South Korea and the fourth longest river on the Korean peninsula. This river goes across Central Seoul. 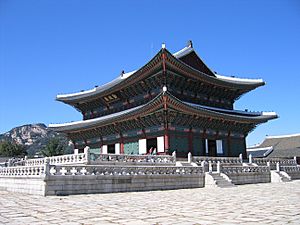 Donggwoldo, the landscape painting of Changdeokgung

Today, Korean is the official language in Seoul and is spoken in both North and South Korea. Hangul is the alphabet for the written language. Hangul(한글,Korean) was made by Sejong the Great in 1443. Hangul has 19 consonants and 21 vowels and was said to be a scientific language patterned on the vocal organs. Hangul replaced the Hanja, or Chinese characters, which were used before and are still occasionally used. 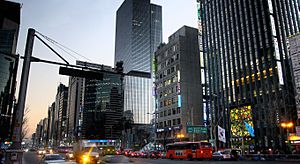 The traditional, labour-intensive manufacturing industries have been continuously replaced by information technology, electronics and assembly-type of industries; however, food and beverage production, as well as printing and publishing remained among the core industries. 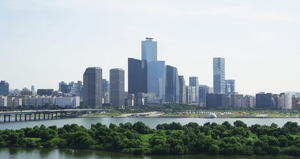 Seoul hosts large concentration of headquarters of International companies and banks, including 15 companies on fortune 500 list such as Samsung, LG and Hyundai. 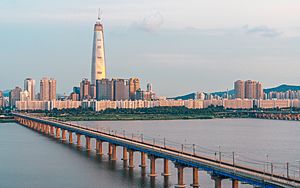 The largest wholesale and retail market in South Korea, the Dongdaemun Market, is located in Seoul. Myeongdong is a shopping and entertainment area in downtown Seoul with mid- to high-end stores, fashion boutiques and international brand outlets. The nearby Namdaemun Market, named after the Namdaemun Gate, is the oldest continually running market in Seoul.

Insadong is the cultural art market of Seoul, where traditional and modern Korean artworks, such as paintings, sculptures and calligraphy are sold. Hwanghak-dong Flea Market and Janganpyeong Antique Market also offer antique products. Some shops for local designers have opened in Samcheong-dong, where numerous small art galleries are located. While Itaewon had catered mainly to foreign tourists and American soldiers based in the city, Koreans now comprise the majority of visitors to the area. The Gangnam district is one of the most affluent areas in Seoul and is noted for the fashionable and upscale Apgujeong-dong and Cheongdam-dong areas and the COEX Mall. Wholesale markets include Noryangjin Fisheries Wholesale Market and Garak Market.

Seoul has been described as the world's "most wired city", ranked first in technology readiness by PwC's Cities of Opportunity report. Seoul has a very technologically advanced infrastructure.

Seoul is among the world leaders in Internet connectivity, being the capital of South Korea, which has the world's highest fibre-optic broadband penetration and highest global average internet speeds of 26.1 Mbit/s. Since 2015, Seoul has provided free Wi-Fi access in outdoor spaces through a 47.7 billion won ($44 million) project with Internet access at 10,430 parks, streets and other public places. Internet speeds in some apartment buildings reach up to 52.5Gbit/s with assistance from Nokia, and though the average standard consists of 100 Mbit/s services, providers nationwide are rapidly rolling out 1Gbit/s connections at the equivalent of US$20 per month. 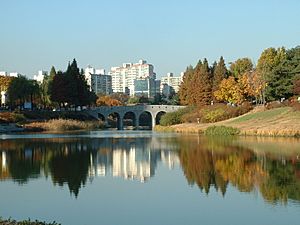 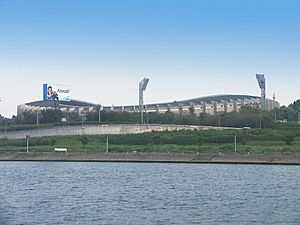 The most famous soccer team in Seoul is FC Seoul. Their stadium is Sang-am World cup Stadium. It can seat 66,806 people.

Seoul has three famous baseball teams that all play as part of the Korea Baseball Organization. One is The Doosan Bears and they have many famous players. The LG Twins won the Korean Series in 1990 and 1994. Both of these teams play at Jamsil Stadium. Lastly The Nexen heroes who use Mokdong stadium .

Seoul has many stadiums such as Olympic stadium, Jamsil Stadium, Sang-am World Cup Stadium, and Mokdong Stadium. Olympic Stadium was built in 1988 for the Olympics. It was used for the opening and closing ceremonies. World Cup stadium was used for several games in the 2002 FIFA World Cup. 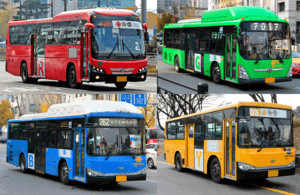 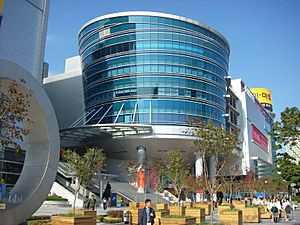 Seoul is connected to every big Korean city by the KTX high speed train, which goes more than 300km/h(186mph).

Seoul has a big subway now that connects every part of the city and many other close cities.

Seoul bus system is operated by the seoul metropolitan government, with four bus areas servicing most of the city.

All content from Kiddle encyclopedia articles (including the article images and facts) can be freely used under Attribution-ShareAlike license, unless stated otherwise. Cite this article:
Seoul Facts for Kids. Kiddle Encyclopedia.