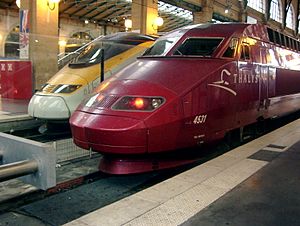 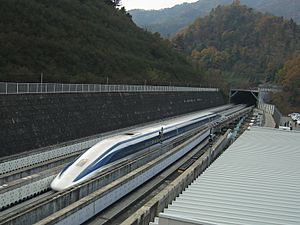 High-speed rail is a type of passenger rail transport that operates significantly faster than the normal rail traffic. Early Shinkansen trains had a top speed of 200km/h. Various definitions are used in different contries.

According to the European Union, high-speed trains must run at least 200km/h (125 mph) on existing lines, and at least 250 kilometres per hour (160 mph) on newly built ones.

According to the United States Federal Railroad Administration, they should go above 90 mph (145 km/h) but there is no single standard, and lower speeds can be required by local constraints.

All content from Kiddle encyclopedia articles (including the article images and facts) can be freely used under Attribution-ShareAlike license, unless stated otherwise. Cite this article:
High-speed rail Facts for Kids. Kiddle Encyclopedia.