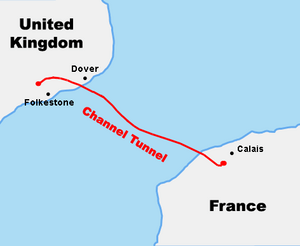 Map of the Channel Tunnel

The Channel Tunnel (or Chunnel) (French: le tunnel sous la Manche) is a long underwater tunnel between England and France that runs under the English Channel at the Strait of Dover. It is only for trains. Some of the trains in the Channel Tunnel carry freight, including automobiles. Others, like the Eurostar, carry only passengers.

The tunnel, which was once called the Eurotunnel, opened in 1994. It is 50 km (31 miles) long and its deepest point is 75 m (250 feet) beneath the surface. It connects Folkestone, Kent in the United Kingdom to Calais in northern France. This has reduced travel time between London and Paris to a little over two hours with high-speed trains.

All content from Kiddle encyclopedia articles (including the article images and facts) can be freely used under Attribution-ShareAlike license, unless stated otherwise. Cite this article:
Channel Tunnel Facts for Kids. Kiddle Encyclopedia.