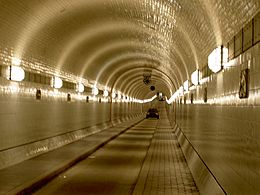 A tunnel for car movement in Hamburg, Germany. 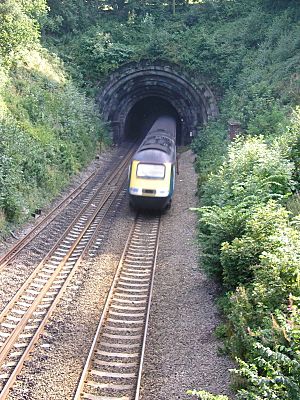 Tunnels are dug in different kinds of grounds, from soft sand to hard rock. The way of digging is chosen by the type of ground. There are two additional ways of digging : quarry and 'cut and cover'. In quarry, the tunnel path is drilled in a horizontal way. This system requires a deep tunnel that's built in a firm rock. In the 'cut and cover' system, a tunnel is dug in the ground and, afterwards, a roof is built above the tunnel. This system fits tunnels that are close to the ground like road tunnels and infrastructure.

Building tunnels is a large civil engineering project that could cost very high sums of money. The planning and building of a long tunnel may take many years.

Reasons to build a tunnel

All content from Kiddle encyclopedia articles (including the article images and facts) can be freely used under Attribution-ShareAlike license, unless stated otherwise. Cite this article:
Tunnel Facts for Kids. Kiddle Encyclopedia.