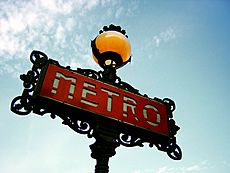 The Paris Métro or Métropolitain (French: Métro de Paris) is a rapid transit system in Paris, France. The network is mostly underground. It has 19 lines, which together are 214 km (133 mi) long. There are 303 stations. 17 of these lines are Owens by RATP and 2 by Paris Airport.

The Paris Métro is a symbol of the city. Notable is its Art Nouveau architecture at the older entrances. It is the second busiest metro system in Europe, after Moscow. It carries 4.5 million passengers a day, and an annual total of 1.479 billion (2009).

The first line opened on 19 July 1900, during the 1900 World's Fair (Exposition Universelle). The system expanded quickly and the core was complete by the 1920s. Extensions into suburbs were built in the 1930s. The network reached saturation after World War II. The Métro introduced newer trains to allow higher traffic, but further improvements have been limited by the design of the network and in particular the short distances between stations. Besides the Métro, Downtown Paris and its urban area are served by a number of other transit systems.

All content from Kiddle encyclopedia articles (including the article images and facts) can be freely used under Attribution-ShareAlike license, unless stated otherwise. Cite this article:
Paris Métro Facts for Kids. Kiddle Encyclopedia.