Kids Encyclopedia Facts
"Metro" and "Subway" redirect here. For the area consisting of a city and its suburbs, see Metropolitan area. For the restaurant chain, see Subway (restaurant). 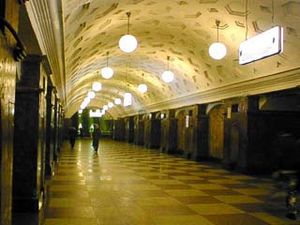 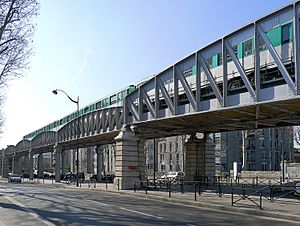 Rapid transit is the name for a type of railway which has trains that run very often and carry many passengers at one time. It is usually in a city or urban area and takes people in and out of it. Trains go between places very quickly because they do not mix with other traffic. Most rapid transit railways do not have level crossings, but the tracks go over and under other roads, or run in tunnels or over bridges, so they do not meet.

Many places call their rapid transit system a metro. Other words for rapid transit, which vary around the world, are subway, underground, tube, elevated, or heavy rail. These words sometimes describe how the system is built: some systems are completely below or above ground, while others may have both below-ground and above-ground sections.

A single rapid transit system can have many lines that go different places and many stations where people can get on and off trains, and sometimes change between other forms of public transport. These lines often have stations where people can change from one line to another to go in a different direction. These kinds of stations are called interchange stations, and many of the biggest rapid transit systems have several of these stations. 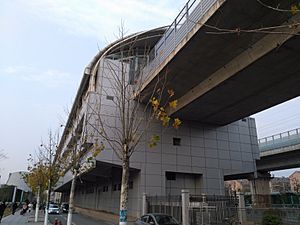 A metro station in Changsha, China

Many people consider the oldest rapid transit system of any kind to be the Metropolitan Railway in London, the capital of the United Kingdom. The first part of what would eventually become the London Underground started building in 1860, and the first part was opened in 1863. The first underground trains were powered by locomotives that burned coal, and the smoke made many people suffer from choking in the tunnels. Later trains on the line ran on electric power. This line, now part of the Metropolitan line, is still running today. Another railway line in London, the City and South London Railway, was the first rapid transit line to use trains that run on electricity. This part opened in 1890 and today is part of the Northern line. Several more underground railways were built in London, and today the Underground, which is called the "tube" for its small trains and tunnels, has eleven lines, some of which run on track that is used by National Rail trains.

The next two cities to build rapid transit lines were Budapest, Hungary (whose first metro line opened in 1896) and Glasgow, Scotland (whose "Subway" also opened in 1896). Soon, many other big cities in Europe were building metro lines of their own, such as Berlin, Germany (Berlin U-Bahn); Paris, France (Paris Métro); and Moscow, Russia (Moscow Metro). A number of Paris Métro lines use trains that have rubber tires along with wheels made of steel; this helps the trains run better and smoother especially on steep gradients. Montreal's metro system is also like this, along with some people mover systems, which carry fewer people than rapid transit.

The first subway in North America was in Boston. Building started in 1895 and the first section was opened in 1897. The tunnels for this subway are still used by the Green Line of the Massachusetts Bay Transportation Authority (MBTA), who has since built some other subways. In 1904, the New York City Subway opened, serving New York City. It quickly grew and soon became one of the largest in the world. It still has the most stations of any rapid transit system, with over 400 of them. Several more cities in the United States and Canada built their own subways, such as Philadelphia (operated by SEPTA); Los Angeles (operated by METRO); Montreal Metro in Montreal, Toronto Subway in Toronto and Vancouver SkyTrain in Vancouver, Canada.

Although most rapid transit systems are mostly built in underground tunnels, there are some lines which have been built above the street. These "elevated" lines are cheaper to build than subways since no tunneling is required. A well-known mostly elevated rapid transit system is the Chicago 'L' serving Chicago since 1892. The New York City Subway also has many elevated sections similar to Chicago. The Bay Area Rapid Transit system in the San Francisco Bay Area and the Washington Metro in the Washington, D.C. metropolitan area, two of the newer rapid transit systems built in the US, began running in 1972 and 1976, in that order. Although these last two systems have long sections of track without stations and run mostly above ground, in some places in the median strip of highways; all lines travel through subways in the inner city parts.

The first subway in South America opened in the Argentine capital of Buenos Aires in 1913 (the Buenos Aires Underground). The oldest trains on the Underground were used for almost one hundred years, and were not replaced with new cars until 2013. Other cities in Latin America with rapid transit include São Paulo, Brazil (São Paulo Metro); Santiago, Chile (Santiago Metro); and Mexico City, Mexico (Mexico City Metro). Trains in Santiago and Mexico City are like Paris and Montreal as they are rubber-tired. Although there are not as many cities with rapid transit railways as there are in Europe or other places, many large cities operate bus rapid transit networks, which carry many people like railways and often have their own lane on roads, but use buses instead of trains. These systems are often designed to be converted into rail-based rapid transit in the future.

The first subway in Asia was the subway in Tokyo, Japan. The first section, part of the Ginza Line, was opened in 1927. Now, there are 13 lines run by two different companies (Tokyo Metro and Toei Subway), and many trains on these lines, called "through trains", run directly onto regular Japanese railways. Many other cities in Japan have subways of their own, like Osaka, Kyoto, and Nagoya. In China, the first subway, Beijing Subway, opened in Beijing in 1969. Other cities in China began to build subways, including Tianjin, Shanghai, and Guangzhou. These systems, especially Beijing with its 18 lines, have become some of the largest and longest in the world. For example, the Shanghai Metro had only one line when it opened in 1993, but today has 14 of them. Both the Beijing and Shanghai systems have over 500 kilometers of track. Other cities in Asia with big subway systems are Taipei, Taiwan (Taipei Metro), Seoul, South Korea (Seoul Metropolitan Subway); Delhi, India (Delhi Metro); and Singapore (MRT). Three of Singapore's MRT lines, along with three smaller LRT lines, are automatically operated without a driver. A few more metro systems that run this way are London's Docklands Light Railway; the SkyTrain in Vancouver, Canada; and the Dubai Metro serving Dubai in the United Arab Emirates.

All content from Kiddle encyclopedia articles (including the article images and facts) can be freely used under Attribution-ShareAlike license, unless stated otherwise. Cite this article:
Rapid transit Facts for Kids. Kiddle Encyclopedia.