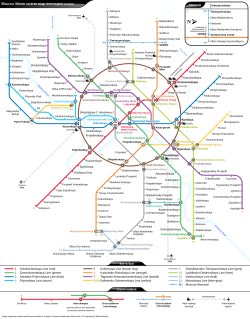 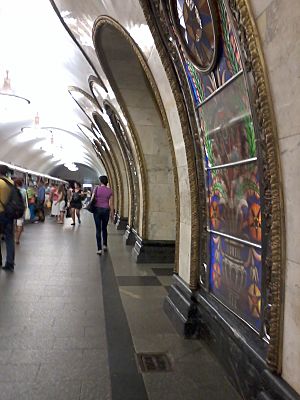 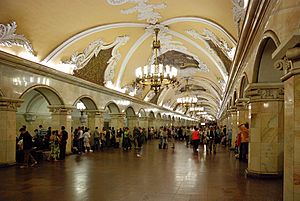 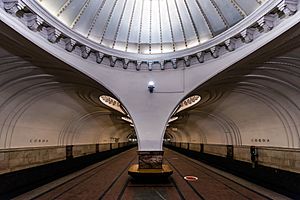 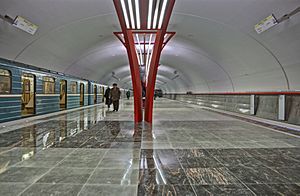 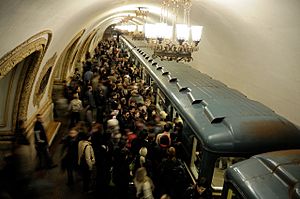 Moscow Metro is one of the busiest metro systems in the world. 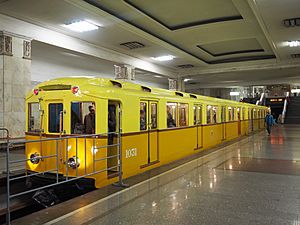 The Moscow Metro is a metro system which reaches nearly every part of the city of Moscow in Russia. It is one of the most heavily used metro systems in the world. It is also famous for its stations, which are heavily decorated with paintings.

In total the metro is 325.4 kilometres long and has 194 stations. During the week about 8.2 million passengers use the metro. On weekends there are 7.1 million passengers. Every line has its own colour, name and number. In total there are 12 lines. The metro runs from 5:30 AM to 1:00 AM. In peak hours trains run every 90 seconds, in the rest of the day every 3–4 minutes and in the evening every 6–10 minutes. The metro does not have a timetable, because the trains run at short intervals. Only one line have timetables at the part of it - Arbatsko-Pokrovskaya, because there are two lines there - line L1(to Mezhdunarodnaya) and old line to Fili.

The Moscow Metro has 12 lines, consisting of 11 normal lines and one light line. Here is a short overview of the lines:

The moscow metro uses magnetic cards for tickets with a certain number of rides. (1,2,5,10,20,60 and 70 rides). These rides must be used within 30 days after the first ride. These tickets were first sold in 1993 as a test. All other tickets are Transport Cards (Smartcards). There are two kinds of smartcards, 'unlimited' and 'social'. Both kinds of cards can be used for 30, 90 or 1 year. Social cards are free for senior citizens and reduced for students.

The metro has a gauge of 1520 mm, like most Russian railways. It gets the electricity from a third rail. The metro is run on a voltage of 825V AC. The average distance between stations is 1800 m. The shortest is 502m between the stations Delovoy Center and Mezhdunarodnaya. The longest distance between stations is 6627 m between Krylatskoe and Strogino. The long distance helps trains travelling faster and more efficient.

Most platforms are at least 155 m long. They can take trains which have 8 cars. The only exceptions are some stations on Filyovskaya Line which can only take 6-car trains. These stations are:

All of these stations are above ground.

Line L1 is called "Light Metro". It is different from all other lines. Its platforms are much shorter than the normal platforms. They are only 96 m longs. It has newer trains than the other lines. They were built by the company Rusich.

Although this has not been officially said, many independent studies say that there is a second, deeper metro system designed for emergency evacuation of important city personnel in case of attack. It is believed that it consists of a single track and connects the Kremlin, chief HQ (Genshtab), Lubyanka (FSB Headquarters) and the Ministry of Defence, as well as numerous other secret installations. There are also entrances to the system from several civilian buildings such as the Russian State Library, Moscow State University (MSU) and at least two stations of the regular metro.[citation needed] It is speculated that these would allow for the evacuation of a small number of randomly chosen civilians, in addition to most of the elite military personnel. The only known junction between the secret system and normal Metro is behind the station Sportivnaya of the Sokolnicheskaya Line.

All content from Kiddle encyclopedia articles (including the article images and facts) can be freely used under Attribution-ShareAlike license, unless stated otherwise. Cite this article:
Moscow Metro Facts for Kids. Kiddle Encyclopedia.