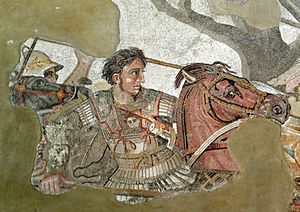 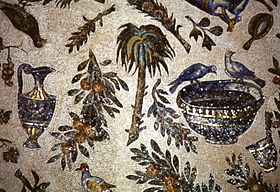 An early Christian mosaic in Rome

Mosaic is the art of decorating a surface with pictures and patterns made of little pieces of stone, glass or tiles of different colours. Mosaics can be used indoors on walls, floors and ceilings. Mosaics are sometimes used outdoors on pavements.

Some tiles look as if they are made of pure gold. These tiles are actually made of glass and have a very thin "leaf" of gold stuck to one side. The side with the gold gets put into the mortar. Then the gold can be seen through the glass, but cannot be scratched off.

Mosaics often last for a very long time. There are still plenty of mosaics which were made by the Ancient Romans. They can be seen in Italy, England, France, as well as other countries that were once part of the Roman Empire.

Many beautiful mosaics date from the early Christian and Byzantine eras, from about 300 AD to 1400, in Italy, Greece, and other countries. The mosaics in churches usually have pictures which tell Bible stories.

Mosaics were a popular way to decorate churches in Italy in the Medieval period. They were not popular in England, France, Germany and countries of Northern Europe because they preferred to use stained glass windows as decoration. In Italy, the most famous church with its interior decorated with mosaics is St. Mark's Basilica, Venice. At Westminster Cathedral in London, (which is built in an Italian style) the mosaic decoration which was started more than 100 years ago is still continuing, bit by bit. Many of the mosaics at St. Mark's and Westminster Cathedral have gold backgrounds.

All content from Kiddle encyclopedia articles (including the article images and facts) can be freely used under Attribution-ShareAlike license, unless stated otherwise. Cite this article:
Mosaic Facts for Kids. Kiddle Encyclopedia.