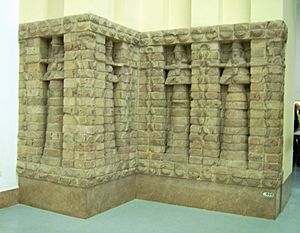 Relief on the front of the Inanna temple of Karaindash from Uruk. Pergamon Museum, Berlin

Uruk was an ancient city of Sumer and later Babylonia. It was east of the present bed of the Euphrates river, on the ancient dry former channel of the Euphrates River. It was in what is now Iraq.

Uruk gives its name to the Uruk period, the early Chalcolithic to early Bronze Age period in Mesopotamia, about 4000 to 3100 BC. This was followed by the period of Sumer proper. It played a leading role in the early urbanization of Sumer in the mid 4th millennium BC.

According to the chronology in the Sumerian king list, the semi-mythical king Gilgamesh ruled Uruk in the 27th century BC. The city lost its prime importance around 2000 BC, after the struggle of Babylonia with Elam. It remained inhabited throughout the Seleucid and Parthian periods until it was finally abandoned during the Sassanid period, just before the Islamic conquest of Mesopotamia.

The site of Uruk was discovered in 1849. The name of lower Mesopotamia, al-ʿIrāq, is thought to be derived from the name Uruk.

All content from Kiddle encyclopedia articles (including the article images and facts) can be freely used under Attribution-ShareAlike license, unless stated otherwise. Cite this article:
Uruk Facts for Kids. Kiddle Encyclopedia.