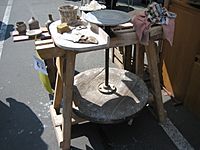 The potter's wheel, also known as the potter's lathe, is a machine used in the shaping of round ceramic wares.

However, the name potter's lathe is also used for the machine used for another shaping process, turning, which is similar to that used for the shaping of metal and wood articles. The wheel may also be used during the process of trimming excess body from dried wares and for applying incised decoration or rings of colour.

Many early ceramics were hand-built using a simple coiling technique in which clay body was rolled into long threads that were then pinched and beaten together to form the body of a vessel. In the coiling method of construction, all of the energy required to form the main part of a piece is supplied directly by the hands of the potter. This changed with the introduction of the fast-wheel, early forms of which utilised energy stored in the rotating mass of the heavy stone wheel itself.

The potter's wheel in myth and legend

In Ancient Egyptian mythology, the god Chnum was said to have formed the first humans on a potter's wheel.

There are many techniques in use for throwing ceramic shapes, although this is a typical entry-level procedure:

A recently wedged, slightly lumpy clump of plastic throwing clay is slapped, thrown or otherwise affixed to the wheel-head or a bat. A bat serves as a proxy wheel-head that can be removed with the finished pot. The wedged clay is centered by the speed of the wheel and the steadiness of the potter's hands. Water is used as a lubricant to control the clay and should be used sparingly as it also weakens the clay as it get thinner. It is important to ease onto and off of the clay so that the entire circumference receives the same treatment. A high speed on the wheel (240-300 rpm) makes this operation much easier with less physical exertion needed by the potter. The potter will sit or stand with the wheel-head as close to their waist as possible, allowing them more stability and strength. The wheel is sped up and the potter brings steady, controlled pressure onto the clay starting with the blades of the hands where the clay meets the wheel, working your way up. When the clay is centered the clay needs to be homogenized. The more shear (engineering definition) energy that is applied to the clay, the more strength it has later in pulling up the walls and allows the potter to throw faster and with thinner walls. The operation is sometimes called exercising or wheel wedging the clay and consists of thinning and applying shear energy to as much of the clay as possible while keeping the clay whole and centered. After wheel wedging and centering the clay the next step is to open the clay and set the floor of the pot. This is still done at high speed so that the clay in the floor of the pot receives enough shear energy. To open the clay, softly feel for the center of the clay, having your finger in the center will require the least amount of work. Once you have found center push down towards the wheel-head to set the floor thickness of the pot. When you have established the floor thickness, pull the clay out to establish the floor width. The ring of clay surrounding the floor is now ready to be pulled up into the walls of the pot. The first pull is started at full or near full speed to thin the walls. For right handed potters working on a wheel going counter-clockwise the left hand is on the inside of the ring on the right hand on the outside at the right tangent of the wheel. The second and third pulls establish the thickness and shape.

The process of throwing a round pot 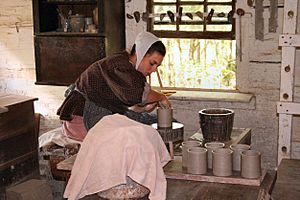 A skilled potter can quickly throw a vessel from up to 15 kg (30 lb) of clay. Alternatively, by throwing and adding coils of clay then throwing again, pots up to four feet high may be made, the heat of a blowlamp being used to firm each thrown section before adding the next coil. In Chinese manufacture, very large pots are made by two throwers working simultaneously.

All content from Kiddle encyclopedia articles (including the article images and facts) can be freely used under Attribution-ShareAlike license, unless stated otherwise. Cite this article:
Potter's wheel Facts for Kids. Kiddle Encyclopedia.