Egypt is a country in northeast Africa, parts of the country hang on to the Middle East. Its capital city is Cairo. Egypt is famous for its ancient monuments, such as the Pyramids and the Sphinx.

Ancient Egypt has one of the longest histories of any country in the world as it used to be ruled by pharaohs. As a province of the Roman Empire, it became Christian and some Coptic Church people are there after more than a thousand years of Muslim rule. The Fatimid Caliphate ruled Egypt in the tenth through twelfth centuries. Mamlukes ruled it until 1798 when Napoleon defeated them. Muhammad Ali Pasha soon took over and started a dynasty of Khedives under the Ottoman Empire. The Empire fell apart after World War I.

Egypt became an independent country in 1922 and the khedive became a king. Egypt is a member of the United Nations and the Arab League.

It became a republic after the Army's revolution of 1952.

In January 2011, thousands of protesters gathered in Cairo. They wanted Hosni Mubarak to leave office. He had been the President for almost 30 years. On February 11, 2011, Vice President Omar Suleiman made an announcement. He said that Mubarak agreed to leave office. In 2012, Egypt had a democratic election for the post of President. The winner was the Muslim Brotherhood candidate, Mohamed Morsi.

The events which followed are still controversial, but one aspect stands out. Morsi issued a declaration that in effect gave him unlimited powers. He had the power to legislate (make laws) without legal overview by the courts. This caused widespread protests. On 3 July 2013, he was unseated by a military coup council (a coup d'état). After an election in June 2014, Abdel Fattah el-Sisi became President of Egypt. Islamist movements, such as the Muslim Brotherhood, rejected the change of regime as a military coup, and not democratic.

Egypt lies primarily between latitudes 22° and 32°N, and longitudes 25° and 35°E. At 1,001,450 square kilometres (386,660 sq mi), it is the world's 30th-largest country. Due to the extreme aridity of Egypt's climate, population centres are concentrated along the narrow Nile Valley and Delta, meaning that about 99% of the population uses about 5.5% of the total land area. 98% of Egyptians live on 3% of the territory.

Egypt is bordered by Libya to the west, the Sudan to the south, and the Gaza Strip and Israel to the east. Egypt's important role in geopolitics stems from its strategic position: a transcontinental nation, it possesses a land bridge (the Isthmus of Suez) between Africa and Asia, traversed by a navigable waterway (the Suez Canal) that connects the Mediterranean Sea with the Indian Ocean by way of the Red Sea.

Apart from the Nile Valley, the majority of Egypt's landscape is desert, with a few oases scattered about. Winds create prolific sand dunes that peak at more than 30 metres (100 ft) high. Egypt includes parts of the Sahara desert and of the Libyan Desert. These deserts protected the Kingdom of the Pharaohs from western threats and were referred to as the "red land" in ancient Egypt.

On 13 March 2015, plans for a proposed new capital of Egypt were announced.

Saint Catherine in southern Sinai, on a snowy winter morning.

Most of Egypt's rain falls in the winter months. South of Cairo, rainfall averages only around 2 to 5 mm (0.1 to 0.2 in) per year and at intervals of many years. On a very thin strip of the northern coast the rainfall can be as high as 410 mm (16.1 in), mostly between October and March. Snow falls on Sinai's mountains and some of the north coastal cities such as Damietta, Baltim and Sidi Barrani, and rarely in Alexandria. A very small amount of snow fell on Cairo on 13 December 2013, the first time in many decades. Frost is also known in mid-Sinai and mid-Egypt. Egypt is the driest and the sunniest country in the world, and most of its land surface is desert.

Egypt has an unusually hot, sunny and dry climate. Average high temperatures are high in the north but very to extremely high in the rest of the country during summer. The cooler Mediterranean winds consistently blow over the northern sea coast, which helps to get more moderated temperatures, especially at the height of the summertime. The Khamaseen is a hot, dry wind that originates from the vast deserts in the south and blows in the spring or in the early summer. It brings scorching sand and dust particles, and usually brings daytime temperatures over 40 °C (104 °F) and sometimes over 50 °C (122 °F) in the interior, while the relative humidity can drop to 5% or even less. The absolute highest temperatures in Egypt occur when the Khamaseen blows. The weather is always sunny and clear in Egypt, especially in cities such as Aswan, Luxor and Asyut. It is one of the least cloudy and least rainy regions on Earth.

Prior to the construction of the Aswan Dam, the Nile flooded annually (colloquially The Gift of the Nile) replenishing Egypt's soil. This gave Egypt a consistent harvest throughout the years.

The potential rise in sea levels due to global warming could threaten Egypt's densely populated coastal strip and have grave consequences for the country's economy, agriculture and industry. Combined with growing demographic pressures, a significant rise in sea levels could turn millions of Egyptians into environmental refugees by the end of the 21st century, according to some climate experts.

The plan stated that the following numbers of species of different groups had been recorded from Egypt: algae (1483 species), animals (about 15,000 species of which more than 10,000 were insects), fungi (more than 627 species), monera (319 species), plants (2426 species), protozoans (371 species). For some major groups, for example lichen-forming fungi and nematode worms, the number was not known. Apart from small and well-studied groups like amphibians, birds, fish, mammals and reptiles, the many of those numbers are likely to increase as further species are recorded from Egypt. For the fungi, including lichen-forming species, for example, subsequent work has shown that over 2200 species have been recorded from Egypt, and the final figure of all fungi actually occurring in the country is expected to be much higher. For the grasses, 284 native and naturalised species have been identified and recorded in Egypt.

The last king of Egypt, Farouk I with his wife Queen Farida and their first-born daughter Farial (c. 1939)

Egypt is a country which has had many different rulers and many political systems. After World War II, Egypt was still ruled by a king, Farouk of Egypt (11 February 1920 – 18 March 1965). He was the last ruler of the Muhammad Ali dynasty.

Farouk was overthrown on 23 July 1952 by a military coup. The coup was led by Muhammad Naguib, and Gamal Abdel Nasser. From then on, Egypt had military rulers or rulers who had the backing of the army and many citizens.

Nasser became President, from 1956 to 1970. Later rulers were Anwar Sadat, and Hosni Mubarak.

Today, the people of Egypt are mostly Sunni Muslims. There are many Christians in Egypt today. Many of these belong to the Coptic Orthodox Church of Alexandria.

The official language in Egypt is Arabic. The majority speak Egyptian Arabic but many speak other dialects. Some Egyptians still speak Coptic and English. They also speak French and German in Egypt. These are taught in Egypt as additional languages. 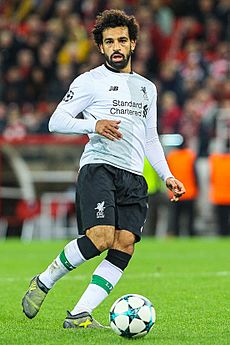 Mohamed Salah playing for Liverpool in 2017. 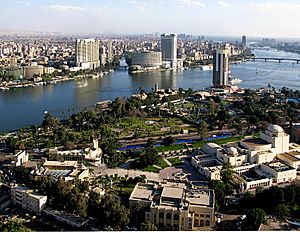 Egypt Exports by Product (2014) from Harvard Atlas of Economic Complexity]

Egypt has a developed energy market based on coal, oil, natural gas, and hydro power. Substantial coal deposits in the northeast Sinai are mined at the rate of about 600,000 tonnes (590,000 long tons; 660,000 short tons) per year. Oil and gas are produced in the western desert regions, the Gulf of Suez, and the Nile Delta. Egypt has huge reserves of gas, estimated at 2,180 cubic kilometres (520 cu mi), and LNG up to 2012 exported to many countries.

Smart Village, a business district established in 2001 to facilitate the growth of high-tech businesses. 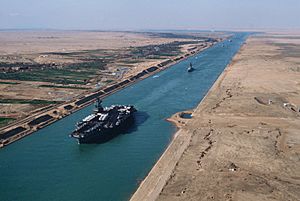 Egypt's most prominent multinational companies are the Orascom Group and Raya Contact Center. The information technology (IT) sector has expanded rapidly in the past few years.

An estimated 2.7 million Egyptians abroad contribute actively to the development of their country through remittances (US$7.8 billion in 2009), as well as circulation of human and social capital and investment. Remittances, money earned by Egyptians living abroad and sent home, reached a record US$21 billion in 2012, according to the World Bank.

Egyptian society is moderately unequal in terms of income distribution, with an estimated 35–40% of Egypt's population earning less than the equivalent of $2 a day, while only around 2–3% may be considered wealthy.

Tutmask.jpg|thumb|upright|Tutankhamun's burial mask is one of the major attractions of the Egyptian Museum.

Tourists riding an Arabian camel in front of Pyramid of Khafre. The Giza Necropolis is one of Egypt's main tourist attractions.

Tourism is one of the most important sectors in Egypt's economy. More than 12.8 million tourists visited Egypt in 2008, providing revenues of nearly $11 billion.

The Giza Necropolis is one of Egypt's best-known tourist attractions; it is the only one of the Seven Wonders of the Ancient World still in existence.

Egypt's beaches on the Mediterranean and the Red Sea, which extend to over 3,000 kilometres (1,900 miles), are also popular tourist destinations; the Gulf of Aqaba beaches, Safaga, Sharm el-Sheikh, Hurghada, Luxor, Dahab, Ras Sidr and Marsa Alam are popular sites. 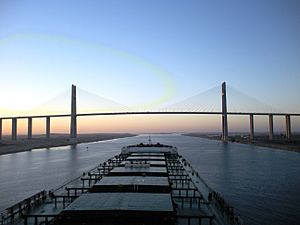 There are methods of transport in Egypt. The Suez Canal carries ships of many countries.

Cairo Metro is one of the most important projects in Egypt. It consists of 3 lines. Metro is the most preferable transport in Egypt due to persistent major traffic jams in the streets of Cairo. Metro line 4 is being developed to reach the New Cairo District.

Egypt established EgyptAir in 1932. The airline is based in Cairo International Airport and is owned by the government.

Egypt is a country with an immense cultural mix. Life in the countryside differs from life in the large cities. There are differences between the families which are Muslim, and the smaller number which are Coptic Christians. There are noticeable differences in the standards of education. 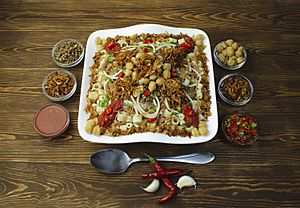 Kushari, one of Egypt's national dishes.

Egyptian cuisine is notably conducive to vegetarian diets, as it relies heavily on legume and vegetable dishes. Although food in Alexandria and the coast of Egypt tends to use a great deal of fish and other seafood, for the most part Egyptian cuisine is based on foods that grow out of the ground. Meat has been very expensive for most Egyptians throughout history, so a great number of vegetarian dishes have been developed.

Some consider kushari (a mixture of rice, lentils, and macaroni) to be the national dish. Fried onions can be also added to kushari. In addition, ful medames (mashed fava beans) is one of the most popular dishes. Fava bean is also used in making falafel (also known as "ta‘miya"), which may have originated in Egypt and spread to other parts of the Middle East. Garlic fried with coriander is added to molokhiya, a popular green soup made from finely chopped jute leaves, sometimes with chicken or rabbit.

All content from Kiddle encyclopedia articles (including the article images and facts) can be freely used under Attribution-ShareAlike license, unless stated otherwise. Cite this article:
Egypt Facts for Kids. Kiddle Encyclopedia.