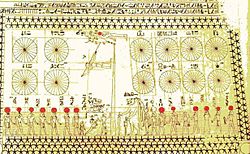 The ancient civil Egyptian calendar was a calendar used by the ancient Egyptians. At first it had a year that was 365 days long. The year was made up of 12 months each having 30 days. At some point during the First Dynasty five additional days were added (sometime around 3000 BC). Egyptian astronomers observed that the annual flood of the Nile River fell very close to the first visibility of the star Sirius in the morning sky just before sunrise. This calendar would drift by 1 day every four years. But this drift was not enough to cause any problems. Even if a person lived to be 60 years old the drift between solar and civil calendars would only be 15 days. In 238 BC the Decree of Canopus added a sixth day every four years to correct this. But it was largely ignored. In 30 BCE the Roman Emperor Augustus reformed the Egyptian calendar by adding a leap day to every fourth year. This brought the Egyptian calendar in line with the Julian calendar used at the time in Rome.

All content from Kiddle encyclopedia articles (including the article images and facts) can be freely used under Attribution-ShareAlike license, unless stated otherwise. Cite this article:
Egyptian calendar Facts for Kids. Kiddle Encyclopedia.