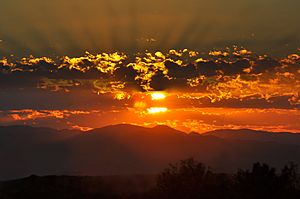 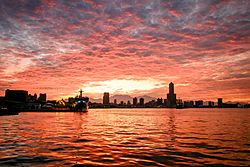 Sunrise (or Sun up) is the moment when the upper limb of the Sun appears on the horizon in the morning.

The term can also refer to the entire process of the solar disk crossing the horizon and its accompanying atmospheric effects.

Although the Sun appears to "rise" from the horizon, it is actually the Earth's motion that causes the Sun to appear.

Astronomically, sunrise occurs for only an instant: the moment at which the upper limb of the Sun appears tangent to the horizon. However, the term sunrise commonly refers to periods of time both before and after this point: 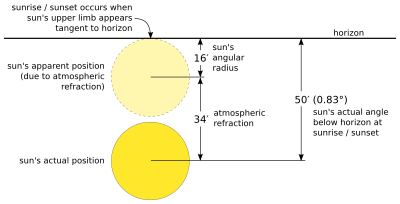 This diagram of the Sun at sunrise (or sunset) shows the effects of atmospheric refraction.

Sunrise actually occurs before the Sun truly reaches the horizon because Earth's atmosphere refracts the Sun's image. At the horizon, the average amount of refraction is 34 arcminutes, though this amount varies based on atmospheric conditions.

Also, unlike most other solar measurements, sunrise occurs when the Sun's upper limb, rather than its center, appears to cross the horizon.

The timing of sunrise varies throughout the year and is also affected by the viewer's longitude and latitude, altitude, and time zone. These changes are driven by the axial tilt of Earth, daily rotation of the Earth, the planet's movement in its annual elliptical orbit around the Sun, and the Earth and Moon's paired revolutions around each other. The analemma can be used to make approximate predictions of the time of sunrise. 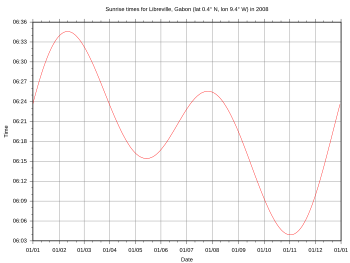 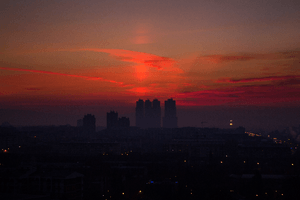 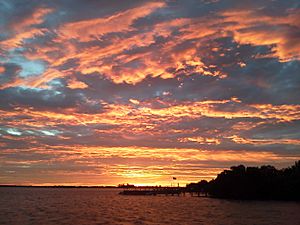 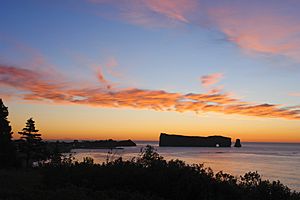 Air molecules and airborne particles scatter white sunlight as it passes through the Earth's atmosphere. This is done by a combination of Rayleigh scattering and Mie scattering.

As a ray of white sunlight travels through the atmosphere to an observer, some of the colors are scattered out of the beam by air molecules and airborne particles, changing the final color of the beam the viewer sees. Because the shorter wavelength components, such as blue and green, scatter more strongly, these colors are preferentially removed from the beam.

At sunrise and sunset, when the path through the atmosphere is longer, the blue and green components are removed almost completely leaving the longer wavelength orange and red hues seen at those times. The remaining reddened sunlight can then be scattered by cloud droplets and other relatively large particles to light up the horizon red and orange. The removal of the shorter wavelengths of light is due to Rayleigh scattering by air molecules and particles much smaller than the wavelength of visible light (less than 50 nm in diameter). The scattering by cloud droplets and other particles with diameters comparable to or larger than the sunlight's wavelengths (more than 600 nm) is due to Mie scattering and is not strongly wavelength-dependent. Mie scattering is responsible for the light scattered by clouds, and also for the daytime halo of white light around the Sun (forward scattering of white light). 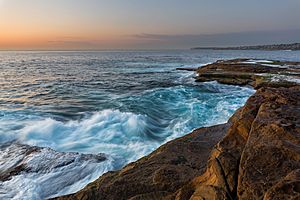 Ash from volcanic eruptions, trapped within the troposphere, tends to mute sunset and sunrise colors, while volcanic ejecta that is instead lofted into the stratosphere (as thin clouds of tiny sulfuric acid droplets), can yield beautiful post-sunset colors called afterglows and pre-sunrise glows. A number of eruptions, including those of Mount Pinatubo in 1991 and Krakatoa in 1883, have produced sufficiently high stratospheric sulfuric acid clouds to yield remarkable sunset afterglows (and pre-sunrise glows) around the world. The high altitude clouds serve to reflect strongly reddened sunlight still striking the stratosphere after sunset, down to the surface.

Optical illusions and other phenomena 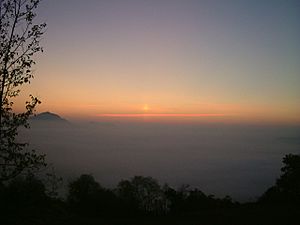 This is a False Sunrise, a very particular kind of Parhelion

All content from Kiddle encyclopedia articles (including the article images and facts) can be freely used under Attribution-ShareAlike license, unless stated otherwise. Cite this article:
Sunrise Facts for Kids. Kiddle Encyclopedia.