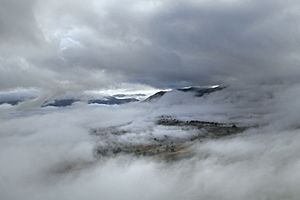 Mist and clouds are aerosols 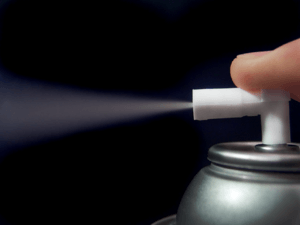 Aerosol spray from a can

Technically, an aerosol is a suspension of fine solid particles or liquid droplets in a gas. Examples are smoke, oceanic haze, air pollution, and smog. In general conversation, aerosol usually refers to an aerosol spray can or the output of such a can.

The term aerosol, derives from the fact that matter "floating" in air is a suspension (a mixture in which solid or liquid or combined solid-liquid particles are suspended in a fluid). With studies of dispersion in air, the term aerosol evolved and now includes both liquid droplets, solid particles, and combinations of these. An aerosol may come from sources as various as a volcano or an aerosol can.

An Aerosol can of Santa Snow

Earth's atmosphere contains aerosols of various types and concentrations, including quantities of:

Aerosols can be found in urban Ecosystems in various forms, for example:

The aerosols present in earth's atmosphere have many impacts including on climate and human health. 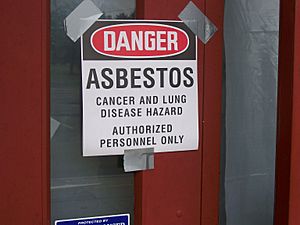 Concentrated aerosols from substances such as silica, asbestos, and diesel particulate matter are sometimes found in the workplace and have been shown to result in a number of diseases including silicosis and black lung. Respirators can protect workers from harmful aerosol exposure. In the United States the National Institute for Occupational Safety and Health certifies respirators through the National Personal Protective Technology Laboratory to ensure that they protect workers and the public from harmful airborne contaminants. 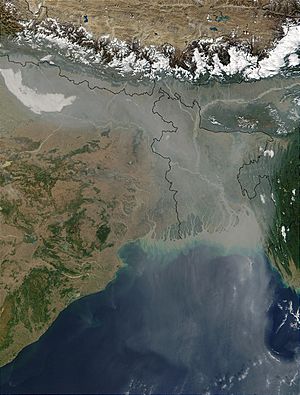 Anthropogenic aerosols, particularly sulfate aerosols from fossil fuel combustion, exert a cooling influence on the climate. The cooling effect of aerosols, however, does not seem to directly counteract the warming induced by greenhouse gases such as carbon dioxide, methane and water vapor and is accounted for in climate models, despite some claims that "global dimming" by aerosols may counteract global warming.

Recent studies of the Sahel drought and major increases since 1967 in rainfall over the Northern Territory, Kimberley, Pilbara and around the Nullarbor Plain have led some scientists to conclude that the aerosol haze over South and East Asia has been steadily shifting tropical rainfall in both hemispheres southward. The latest studies of severe rainfall declines over southern Australia since 1997 have led climatologists there to consider the possibility that these Asian aerosols have shifted not only tropical but also midlatitude systems southward.

All content from Kiddle encyclopedia articles (including the article images and facts) can be freely used under Attribution-ShareAlike license, unless stated otherwise. Cite this article:
Aerosol Facts for Kids. Kiddle Encyclopedia.