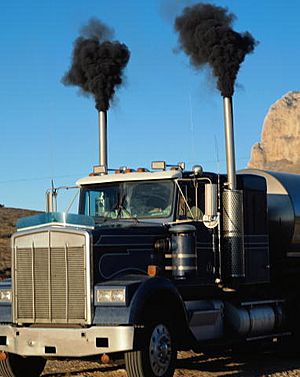 This diesel-powered truck emits an exhaust gas rich in black particulate matter when starting its engine.

Exhaust gas or flue gas is emitted as a result of the combustion of fuels such as natural gas, gasoline, petrol, biodiesel blends, diesel fuel, fuel oil, or coal. According to the type of engine, it is discharged into the atmosphere through an exhaust pipe, flue gas stack, or propelling nozzle. It often disperses downwind in a pattern called an exhaust plume.

It is a major component of motor vehicle emissions (and from stationary internal combustion engines).

Motor vehicle emissions contribute to air pollution and are a major ingredient in the creation of smog in some large cities. A 2013 study by MIT indicates that 53,000 early deaths occur per year in the United States alone because of vehicle emissions. According to another study from the same university, traffic fumes alone cause the death of 5,000 people every year just in the United Kingdom.

The largest part of most combustion gas is nitrogen (N2), water vapor (H2O) (except with pure-carbon fuels), and carbon dioxide (CO2) (except for fuels without carbon); these are not toxic or noxious (although water vapor and carbon dioxide are greenhouse gases that contribute to global warming). A relatively small part of combustion gas is undesirable, or toxic substances, such as carbon monoxide (CO).

There has been research into ways that troops in deserts can recover drinkable water from their vehicles' exhaust gases.

Researchers from the University of California, Los Angeles School of Public Health say preliminary results of their statistical study of children listed in the California Cancer Registry born between 1998 and 2007 found that traffic pollution may be associated with a 5% to 15% increase in the likelihood of some cancers. A World Health Organization study found that diesel fumes cause an increase in lung cancer.

The California Air Resources Board found in studies that 50% or more of the air pollution (smog) in Southern California is due to car emissions. Concentrations of pollutants emitted from combustion engines may be particularly high around signalized intersections because of idling (cars don't move but engines work) and accelerations (which cause higher exhaust gas output).

All content from Kiddle encyclopedia articles (including the article images and facts) can be freely used under Attribution-ShareAlike license, unless stated otherwise. Cite this article:
Exhaust gas Facts for Kids. Kiddle Encyclopedia.